In Bohol town, coco bras are a hit | Inquirer News

In Bohol town, coco bras are a hit 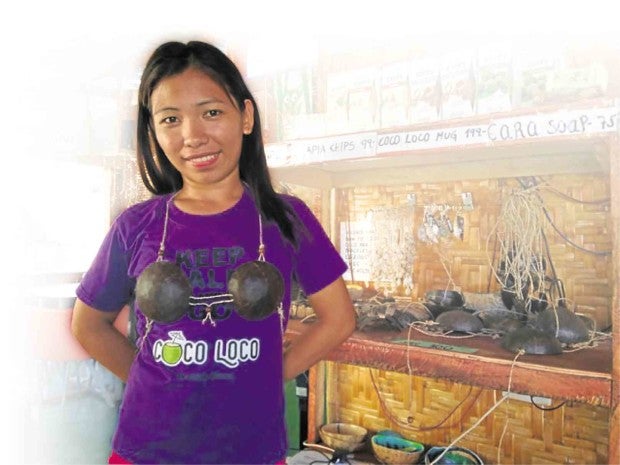 A VENDOR in Anda town, Bohol province, demonstrates the proper use of the coco bra, which is drawing tourists to the town as much as its white sand beach. LEO UDTOHAN

TOURISTS travel 99 kilometers from Tagbilaran City, the capital of Bohol province, to the sleepy seaside town of Anda because of its white sand beach.

But there is another personal reason for the trip: To buy coconut bra as bikini top.

“The coco bra is probably better described a coconut bikini top,” said Robin Gurney, the founder of AndaKidz, a nonprofit, nonsectarian organization which helps the hungry children of Anda and projects of the Talisay Fishermen Association (Tafias).

“Coco bra just sounds snappier and cooler,” he added.
The bikini top is made of real coconut shells with braided raffia or hemp strings to tie around the neck and back. Members of Tafias sell the beachwear.

It was Gurney, a Briton, who conceptualized the coco bra as one of the livelihood projects of Tafias. He drew his inspiration from the coco bra and hula skirt which are iconic images of hula dancing and party wear in Hawaiian luaus.

“We had seen that in Hawaii, the coconut bra sells well so we tried to do a Filipino version because there are many coconuts in the area,” Gurney said.

At least 100 coco bras were sold when these were introduced to the market in March in Anda and Boracay Pub Crawl, a shop on the island-resort of Boracay in Aklan province. 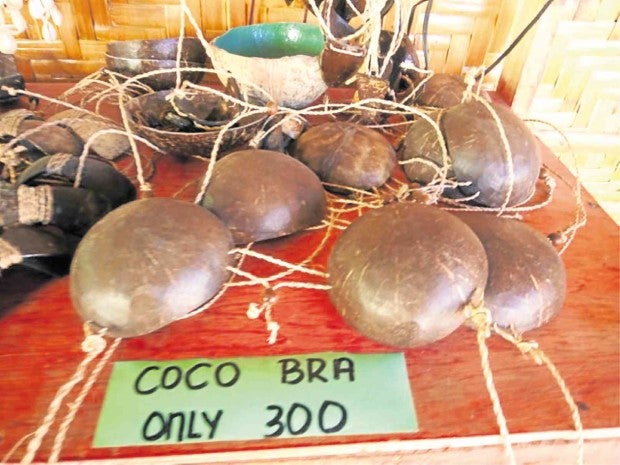 COCO bras are sold in the town of Anda, Bohol province, where the unique pieces have been enjoying brisk sales as souvenir items. LEO UDTOHAN

The product created quite a stir among male tourists and expatriates in Anda and Boracay. Gurney said men bought the bras for their girlfriends, and others for souvenir items or personal use.

“The Philippines is a tropical destination for tourists (domestic and international). When they are in a holiday mode, many of these tourists make instinctive, impulsive purchases of souvenir items,” Gurney said.

At least 50 Tafias members, mostly fishermen and out-of-school youths, have been trained to produce a wide range of coconut and bamboo jewelry. The materials and tools were donated and provided by AndaKidz under a project co-funded by Estoninan Development Cooperation.

In Barangay Talisay, where the Tafias center is found, AndaKidz also helped the association put up an eco-friendly community center which uses plastic soda bottles and liquor bottles as walls. The center also has a children’s library, play dens, musical instruments, study tables and spacious halls for use of volunteers as training and meeting venues.

Tafias members craft the handmade, all-natural material and eco-friendly coco bras in the facility. They produce at least 50 bras a day.

“I estimate 100 per day is possible, more if we have more supplies and labor. It’s (the product) very salable,” Gurney said.

Each of them is paid P250-P350 per day and not per piece, to build stocks, Gurney said. “In the future, they may get a per-piece rate. They earn more than they could anywhere else in the barangay.”

The coconut shells come from farmers in Jagna town, which is known for making “calamay,” a sticky sweet delicacy made of brown sugar, glutinous rice flour and coconut milk. These are sawn in half for even cup sizes, smoothened with sand paper and the rough edges trimmed for comfort.

Straps are attached through two holes drilled on each side of the cup. Wood polish is applied for a gleam finish and waterproofing. 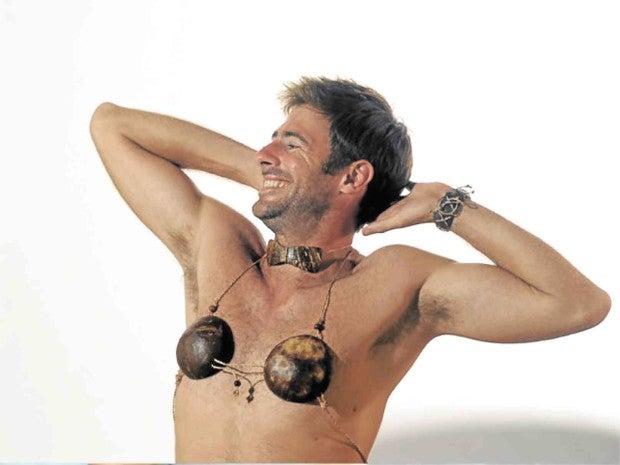 A MALE model demonstrates another way to enjoy wearing the coco bra, which is produced by members of Talisay Fishermen’s Association in Anda town, Bohol. ROBIN GURNEY/CONTRIBUTOR

Coco bra is sold at P300 at Coco Loco Cafe in Anda’s town center. The outlet also peddles other Tafias products ranging from fashion jewelry and accessories (earrings, necklaces, bracelets, bangles and even bow ties made of coconut shell) to food products, such as homemade organic ice cream of different flavors and tilapia chips.

Gurney hopes Tafias can find retailers in beach destination who can sell the products. “The coco bra is new but we have had orders from Estonia and Boracay so far,” he said.

Her advice on how to wear it? Nothing. Just be confident.