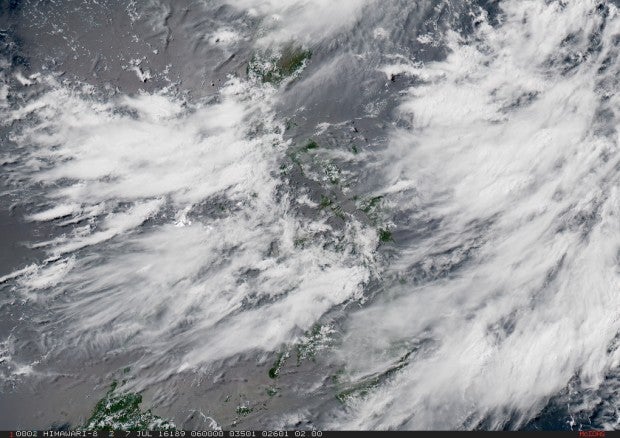 MANILA, Philippines — Philippine forecasters warned fishing boats not to venture out to sea and commercial ships to watch out for big waves Thursday as a powerful typhoon roared off the country’s northeastern coast.

The fast-moving Typhoon Nepartak (local name: Butchoy) would not likely hit land but would intensify seasonal southwest monsoon rains, which could spark thunderstorms and flash floods on the main northern Luzon island, said government forecaster Aldzar Aurelio. Some domestic flights have been canceled in the region.

Nepartak was blowing over the Philippine Sea about 235 kilometers (146 miles) northeast of Batanes province with sustained winds of 220 kilometers (136 miles) per hour and gusts of 255 kph (158 mph), he said.

READ: Batanes under Signal No. 2 as ‘Butchoy’ slows

Storm alerts have been raised in Batanes, about 700 kilometers (434 miles) north of Manila, and outlying islands in a sparsely-populated region in the country’s northern tip.

Nepartak, a Micronesian word for a local warrior, could still gain strength and would start to blow away from the Philippines on Friday and head toward Taiwan, he said.

One of the world’s most disaster-prone countries, the Philippines is lashed by 18 to 21 storms and typhoons, mostly from the Pacific, each year.

In November 2013, Typhoon Haiyan struck the central Philippines with ferocious power, leaving more than 7,300 people dead and missing and displacing more than 5 million others after leveling entire villages.