#InquirerSeven Facts on the state of the nation after Aquino term

President Rodrigo Roa Duterte is the Philippines’ 16th head of state, and the ball is now in his court to continue the boons in the country and improve on the failings of his predecessors, as well as fulfill the numerous promises of change espoused during the 2016 electoral campaign.

President Duterte is set to speak before Congress in his first State of the Nation Address (SONA) on July 25, 2016, at the Batasang Pambansa Complex.

In preparation for the legislative agenda that will be discussed during the SONA, INQUIRER.net has compiled interesting facts and statistics–some of which are the bases for Mr. Duterte’s campaign promises–that unfolded during the administration of former President Benigno Aquino III, to look at what has changed in the country since then and what more needs to be done from now until 2022.

Here are the #InquirerSeven facts on the state of the nation after Aquino’s six-year term.

1. The number of drug-related arrests by PDEA has increased 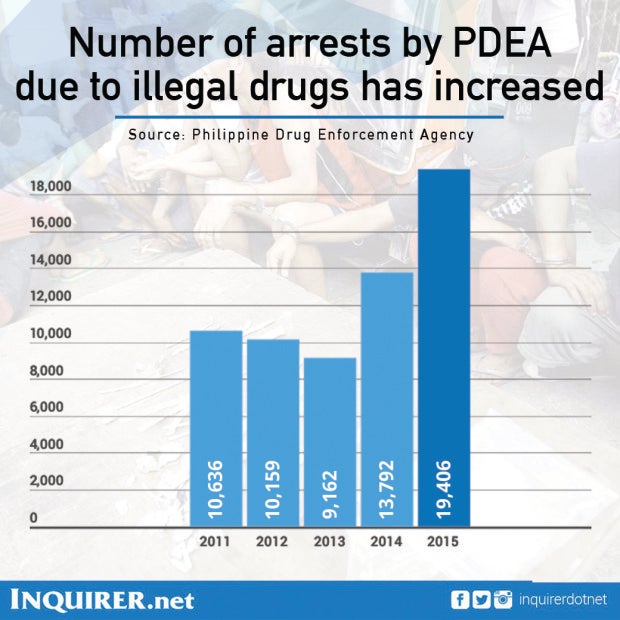 President Duterte promised during the recent electoral campaign to rid the country of illegal drugs in three to six months. Even before he formally took office on June 30, 2016, data from the Philippine Drug Enforcement Agency (PDEA) showed a steady increase in number of arrested persons in anti-illegal drugs operations from 2011 to 2015.

2. There are more vehicles on the road but fewer traffic violation apprehensions 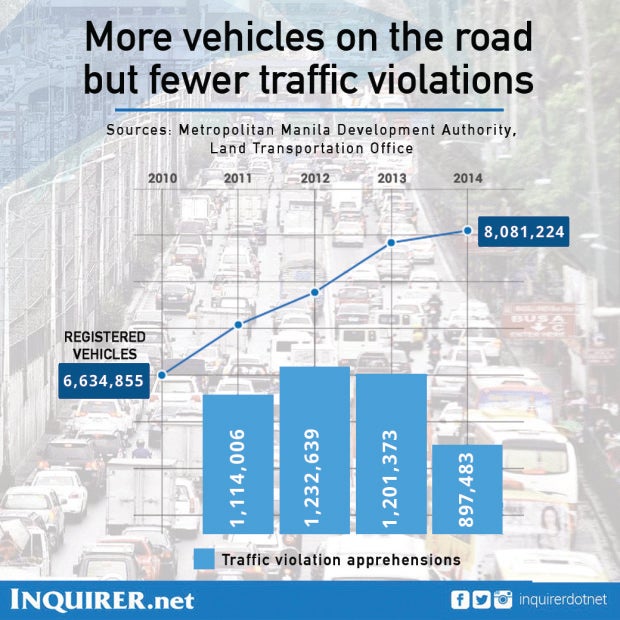 The administration of Mr. Duterte is exploring the use of a president’s emergency powers to solve Metro Manila’s traffic woes. From 2010 to 2014, around 1.4 million new vehicles were registered with the Land Transportation Office (LTO), increasing the total number of vehicles on the road from 6.6 million to 8 million. However, the number of drivers apprehended by the LTO and Metropolitan Manila Development Authority (MMDA) for traffic violations has decreased, from 1.1 million in 2011 to around 900,000 in 2014. 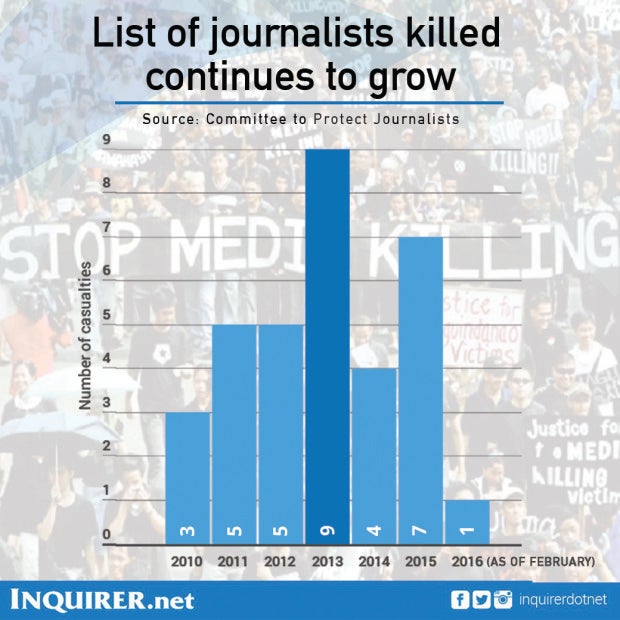 The Philippines remains as one of the most dangerous places for journalists in the world, with 34 media fatalities during Aquino’s term, according to a report from the International Committee to Protect Journalists. This figure, however, is lower than that of his predecessor’s; 80 media fatalities, including 32 from the Maguindanao Massacre in 2009, occurred over the course of President Gloria Macapagal-Arroyo’s nine-year presidency.

4. CCT beneficiaries have increased, but more people consider themselves poor 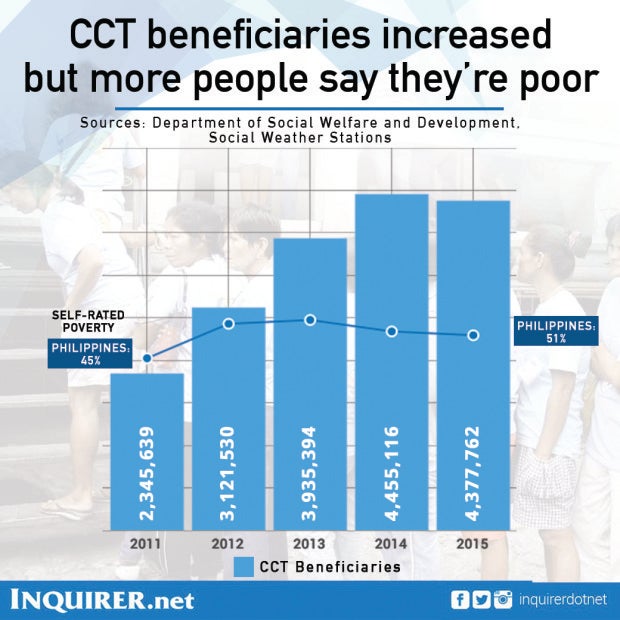 The number of beneficiaries of the Pantawid Pamilyang Pilipino Program (4Ps) under the Department of Social Welfare and Development (DSWD) increased significantly under the Aquino administration. However, the number of Filipinos who consider themselves poor also increased nationwide, from 49 percent during the fourth quarter of 2010 to 51 percent in the second quarter of 2015, according to surveys conducted by Social Weather Stations (SWS).

5. Philippine Internet speed has improved but lags behind Asean neighbors 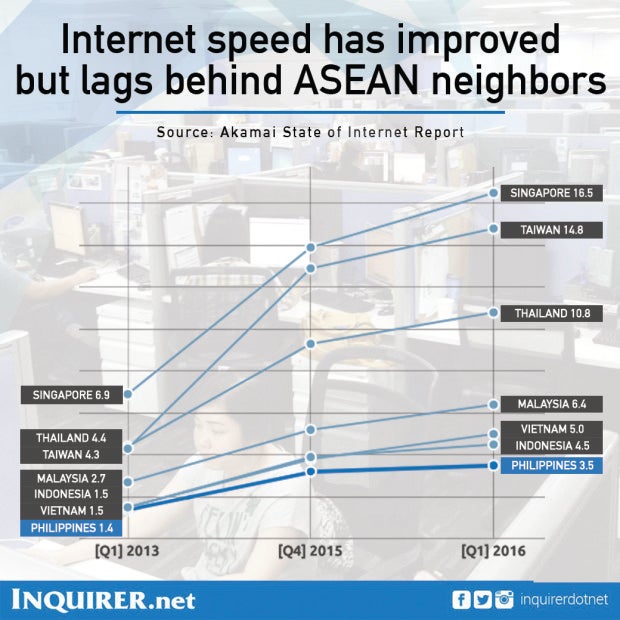 Before Aquino stepped down, he signed the law establishing the Department of Information and Communications Technology (DICT), which aims to finally solve the Philippines’ problem when it comes to slow and expensive internet service.

The country’s average internet speed had, in fact, doubled, from 1.4 megabits per second (Mbps) in the third quarter of 2013 to 3.5 mbps in the first quarter of 2016, according to the latest State of the Internet report released by online content distribution network Akamai. But the Philippines’ neighbors experienced much greater improvement in their internet speed. Taiwan, for example, jumped from 4.3 Mbps to 14.8 mbps over the same period. 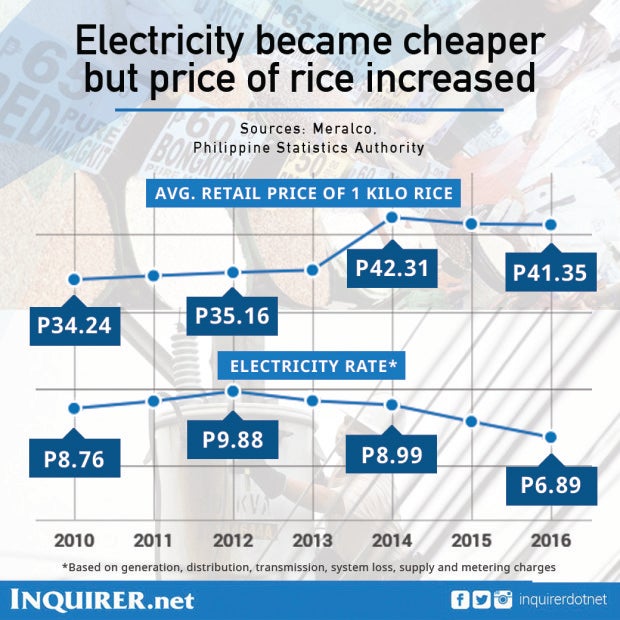 Electricity rates (generation, distribution, transmission, system loss, supply and metering charges) of Manila Electric Co. (Meralco) have gone down over the past six years by around P2.10 per kilowatt per hour (kWh), from P8.76 in 2010 to P6.89 in 2016.

Data from the Philippine Statistics Authority during the same time period showed that the average price of a kilo of well-milled rice had increased by P7 from P34.35 in 2010 to P41.35 in 2016. 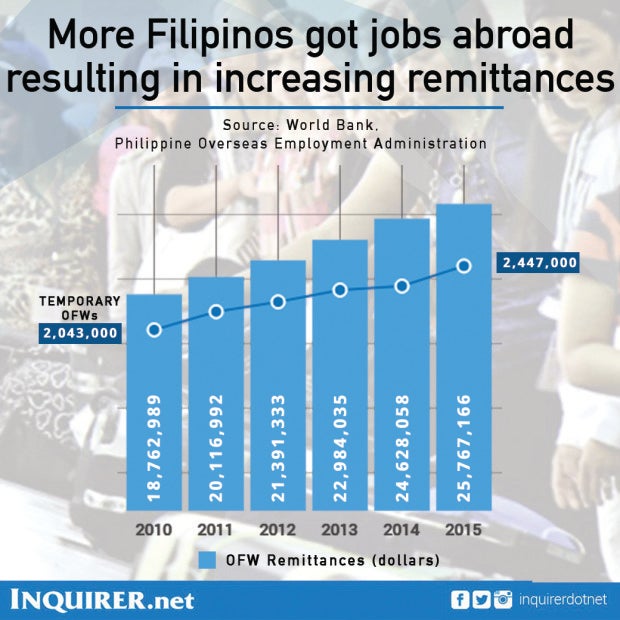