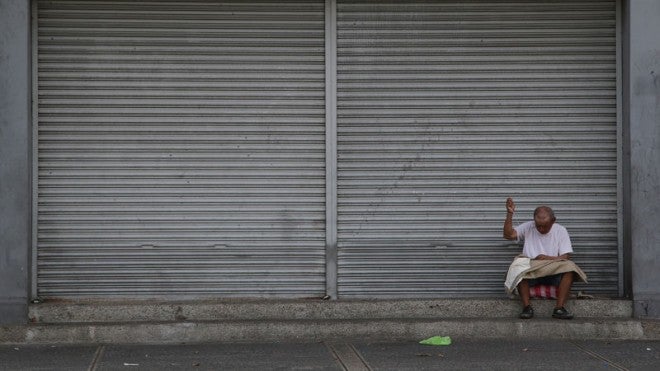 A Filipino man mends pants along a street in Manila on Sunday, April 19, 2015. About 11.4 million families remained poor in the first quarter of the year, while some 7.9 million Filipinos rated themselves food-poor, according to the latest Social Weather Stations (SWS) survey. AP PHOTO/AARON FAVILA 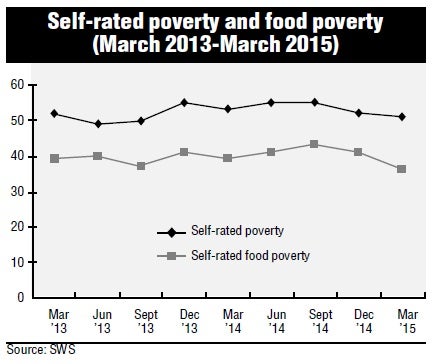 MANILA, Philippines–About 11.4 million families remained poor in the first quarter of the year, while some 7.9 million Filipinos rated themselves food-poor, according to the latest Social Weather Stations (SWS) survey.

The survey, conducted from March 20 to 23 and first published in the BusinessWorld newspaper, showed 51 percent who rated themselves poor,

unchanged from 52 percent, or 11.4 million families, who rated themselves poor in the previous quarter.

In the previous 18 surveys conducted during the Aquino administration, self-rated poverty registered beyond 50 percent 11 times. The record-high 55 percent was posted in March 2012, December 2013, June and September 2014, while the record-low 45 percent was registered in December 2011.

Benjamin Diokno, an economics professor at the University of the Philippines, said there has been no improvement in self-rated poverty, as one of two households have considered themselves poor since 2010.

The SWS also found that 36 percent of respondents said they considered themselves poor in terms of food, five points lower than the 41 percent, or an estimated 9.1 million families, in December.

Diokno said the slight improvement in the food poverty situation may be attributed to lower inflation because of the sharp drop in world oil prices.

“Government authorities have nothing to do with cheaper oil and therefore cannot claim credit for it,” he said.

The SWS asked heads of households to pick a showcard that describes their family: Not poor, on the line or poor. Similar showcards were used with questions asking about the type of food they eat.

Self-rated food poverty slightly declined in the rest of Luzon (28 percent from 37 percent), Metro Manila (20 percent from 24 percent) and Visayas (45 percent from 51 percent) while it remained unchanged in Mindanao (52 percent).

The median self-rated poverty threshold in the rest of Luzon increased from P8,000 in December to P15,000 in March, while it remained unchanged in Mindanao (P10,000).

The survey used face-to-face interviews with 1,200 respondents and had a margin of error of plus-or-minus 3 percentage points.–Rafael L. Antonio, Inquirer Research