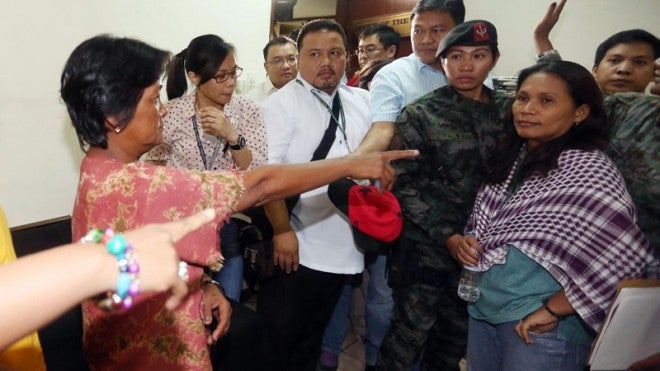 DRUG MULE RECRUITER SUSPECT TAGGED Maria Cristina Sergio, 47, (right) is identified during an NBI inquest on human trafficking charges by Celia Veloso, mother of death convict Mary Jane Veloso, as the woman who recruited her daughter for a job that ended in her arrest in Indonesia for carrying 2.6 kilos of heroin in her suitcase. MARIANNE BERMUDEZ

MANILA, Philippines–The alleged recruiters of Mary Jane Veloso were placed under arrest on Tuesday by the National Bureau of Investigation after they were positively identified by the parents of Veloso as the couple who recruited her prior to her arrest in Indonesia for carrying illegal drugs in April 2010.

Maria Cristina Sergio and her live-in partner Julius Lacanilao were taken to the NBI a week after they went to the Philippine National Police office in Nueva Ecija province to seek protection from alleged death threats.

At the NBI, the two were told they had been placed under arrest.

Sergio said she was “very surprised” by the NBI move and declined further comment.

Eric Nuqui, chief of the NBI’s Anti-Human Trafficking Division, said new human trafficking and illegal recruitment charges had been filed against Sergio and Lacanilao in the Department of Justice by Veloso’s parents and 10 others.

The appearance of Sergio and Lacanilao last week paved the way for the temporary reprieve of Veloso from a firing squad on April 28 until she could give testimony in the cases against the two. Sergio is Veloso’s godsister.

The couple, who had been under PNP protection, were escorted by a Special Action Force team and their lawyers from the Public Attorney’s Office (PAO).

Bassit Sarip, an NBI executive officer, explained that the earlier case filed by the NBI which became the basis of the delay in the execution of Veloso could be thrown out due to a technicality.

“We want to ensure that the charges against Sergio and Lacanilao stick. In human trafficking there are only two complainants—the victim and the parents. The complainant should be present to swear in the complaint. In the case of Veloso, she is not here, so the parents now act as the complainant,” Sarip said.

He added that apart from Veloso, several others had executed affidavits detailing how they had become victims of Sergio.

“The same modus operandi with Veloso. She will bring the victims to Thailand, Singapore, Malaysia and Japan. From there the victim would travel to China, Hong Kong or Indonesia as a drug mule or transporter,” Sarip said.

He also said that one of the complainants was a relative of a Filipino detained in Hong Kong for possession of 800 grams of heroin.

He added that based on the affidavits, “all the victims were accompanied by Sergio to their travels abroad.”

Justice Secretary Leila de Lima has created the 20-member special task force that would handle the investigation, case buildup and prosecution of cases involving Veloso, who got a temporary reprieve on April 28 minutes before being executed by firing squad in Indonesia.

The task force, according to De Lima’s order released on Tuesday, are composed of personnel from the NBI, the National Prosecution Service (NPS) and Inter-Agency Council Against Trafficking (IACAT), as well as the DOJ legal staff.

The cases, which are set for preliminary investigation in the DOJ on May 8 and 14, stemmed from Veloso’s sworn statement obtained by Philippine Drug Enforcement Agency operatives who visited her in Indonesia on March 31.

De Lima said she would directly supervise the task force with the assistance of Justice Undersecretary Jose Vicente Salazar, who is in charge of the IACAT.–With a report from Jerome C. Aning