Peace council: No ‘silver bullet’ to end war in South

MANILA, Philippines–President Aquino’s peace council told senators on Tuesday there was “no silver bullet” that could end violence in Mindanao but the proposed Bangsamoro Basic Law (BBL) could usher in a regime of peace, end corruption, and spur reforms and development in the region.

Following its presentation to the House of Representatives last week, the council headed by former Chief Justice Hilario Davide Jr. submitted its 50-page report to Senate President Franklin Drilon and gave a three-hour briefing on the results of its deliberations on the BBL ordered by Aquino in an attempt to get Congress to approve the measure that had been stalled in the wake of the Jan. 25 massacre of 44 police commandos in Maguindanao province.

“We can assure you, that we tried our very best to achieve some very constructive recommendations to ensure that the BBL will be able to promote justice, peace, not only in Mindanao, but also in the entire Philippines,” Davide said at a press briefing with Drilon.

“There is no silver bullet that will erase all sources of violence,” said former Education Secretary Edilberto de Jesus, a member of the council. “There is no magic vaccine that will inoculate the country from problems of future misgovernance by corrupt and incompetent leaders.”

Although the President’s allies in Congress were intent on passing the BBL by June 11, according to Malacañang’s revised timetable, members of the Senate local government committee acknowledged there were problems and deficiencies in the proposed legislation in its present form.

Sen. Ferdinand Marcos Jr., the committee chair, told reporters after the hearing that he did not think Congress will pass the current BBL. 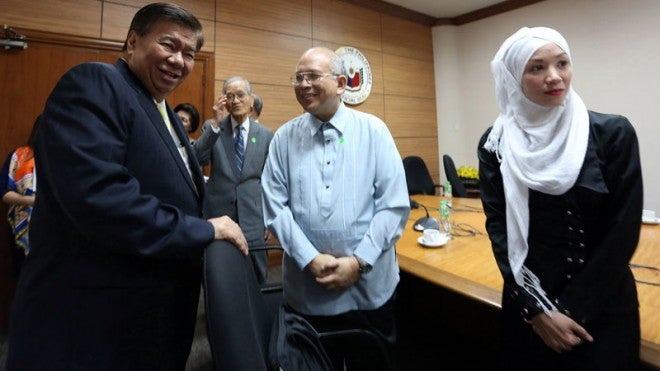 “I think I can categorically state that the draft BBL as transmitted by the President to the Senate and the House of Representatives would not pass either House,” Marcos said.

Drilon said Marcos would terminate the BBL hearings of his committee in two weeks so there would be enough time to debate on the final committee report in the plenary deliberations before Congress adjourns on June 11.

Considered the “most sensitive” of these four themes was the issue on security, according to De Jesus, who presented the security cluster report.

De Jesus said the cluster had to address the Jan. 25 Mamasapano incident in its report, noting that “without Mamasapano, the BBL deliberations would have proceeded with less friction.”

“The cluster concluded that the full resolution of the Mamasapano incident should not become a precondition for pursuing the peace process. By its nature, conflict breeds mistrust which Mamasapano unfortunately intensified,” he said.

To conclude the peace agreement, he said both parties should be “willing to suspend mistrust long enough to make negotiations productive.”

De Jesus said the real work of peace-making was reconciliation and justice “and that comes after the agreement not before.”

“Signing a peace agreement does not ensure peace but it makes possible the reduction of violence and creates a space for reconciliation,” he said.

“The cluster therefore believes that the best way to rebuild trust is to pursue the peace process and the passage of the BBL even as the task evaluates the failure of Mamasapano…,” De Jesus also said.

In resolving questions on Mamasapano, there is a need to “go beyond ordinary penal laws,” he said, adding that once the BBL is passed, this could be resolved “under a civic and legal regime established within BBL or other institutional mechanisms.”

Marcos told reporters that the views and recommendations of the peace council would “advance” the Senate discussion on the BBL.

Marcos said he planned to hold three more hearings until May 25. He said he would hold hearings in Jolo and Zamboanga cities on May 12 and 13, another hearing for retired police and military officers and then the last hearing on May 25, this time with indigenous people and the sultanates.

Sen. Francis Escudero suggested that the Senate deal with the BBL “provision by provision” so there will be a “logical” deliberation.

Asked about the June 11 deadline set by the Senate and House leadership, Escudero said: “When the deliberations are done, that will be the right time to conclude it. It’s not for them to give us a deadline,” he said.