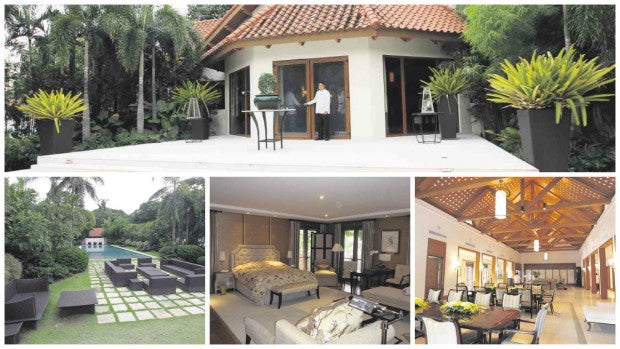 DREAM HOUSE Despite initial reservations, President Duterte has decided to take up official residence at Bahay Pangarap (top), where then President Benigno Aquino III used to live. From left: the pool, the master bedroom and the dining hall FILE PHOTOS

After saying he was spooked by reported ghost sightings in Malacañang, President Duterte has decided to move into Bahay Pangarap which his predecessor, former President Benigno Aquino III, used during his six-year term.

And like its previous resident, the new occupant of the bungalow structure facing Pasig River will stay there by his lonesome, as members of his immediate family are staying put in Davao City.

A senior Malacañang official on Wednesday said Mr. Duterte had decided to make Bahay Pangarap his official residence in Manila after staying in various hotels in the metropolis since he was sworn into office on June 30.

The source, who agreed to be interviewed on condition of anonymity, said the President’s new home was now undergoing repairs in time for his transfer.

“It’s now being cleaned up. President Duterte will move in probably by next week,” the Palace official said.

Christopher “Bong” Go, newly appointed head of the Presidential Management Staff, confirmed as much in a text message to Inquirer.net on Wednesday.

“He actually prefers a smaller and much simpler place. The President is a very simple person,” Go added.

The Palace source said President Duterte would still fly home to Davao City every weekend as he had previously disclosed to the media.

The President will be living on his own, the source said, adding that the Duterte children are all living in Davao.

“His youngest daughter is still studying in Davao,” he added.

Asked if new furniture would be brought in for Mr. Duterte’s new home, the source said there was no need for it. “Only new curtains will be installed,” he said.

“As I have said, the President is a very simple guy. A simple place is OK with him,” the source added.

In 2010, then President  Aquino  chose to stay in the prewar era structure and became the first Philippine President to make Bahay Pangarap his official residence.

Previous Presidents have used the structure for formal dinners and other social functions, with then First Lady Evangeline Macapagal renaming it Bahay Pangarap in the 1960s.

Located near the presidential golf course, Bahay Pangarap was renovated in 2010 when Mr. Aquino moved in.

It retained its art deco look but was refurbished with the addition of three bedrooms to the existing master bedroom. It has been described as having a “resort ambience,” complete with a swimming pool and a Balinese-style garden.

Bahay Pangarap was built before World War II as a recreational retreat inside Malacañang Park. The prewar park had a rest house, a recreation hall, putting green, stables and tennis courts.

Fidel V. Ramos also lived in Arlegui and held office in the Palace.