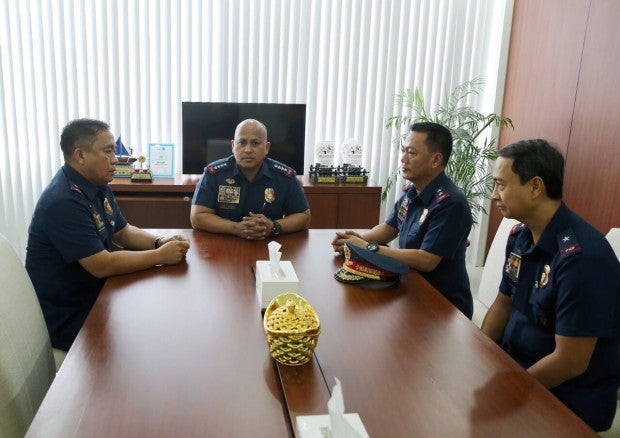 A far cry from his usual tough image, Philippine National Police chief Ronald “Bato” Dela Rosa turned emotional when he described what he felt about his meeting with three police generals who had been linked by President Rodrigo Duterte to drug trade.

On the verge of tears, Dela Rosa said before the media: “I want to cry with them.”

On Wednesday morning, Pagdilao, Tinio and Diaz met with Dela Rosa in his office at the PNP headquarters in Camp Crame, Quezon City.

Also present in the meeting were representatives from the Department of Interior and Local Government (DILG) and National Police Commission (Napolcom). It lasted for less than an hour.

Pressed to describe the mood during the meeting, Dela Rosa said: “It was very intimate. Don’t ask anymore. I might cry here.”

“Our meeting was purely intimate and personal. I cannot discuss it in public. (But) my advice to them is face the music,” Dela Rosa said in a press conference after the meeting.

Dela Rosa’s spokesperson Senior Supt. Dionardo Carlos, who witnessed the meeting, said there was no tense moment but the officers broke down in tears as they spoke with Dela Rosa.

(It was quiet. It was a difficult situation. Of course, we understand that they did not become generals just out of nowhere. It’s normal, human emotion for them to feel that way as they go through this ordeal.)

Duterte on Tuesday identified Pagdilao, Tinio, Diaz, Loot and Garbo as the police generals who were coddling drug lords in their areas of assignment.

Duterte dropped the bombshell during the 69th anniversary of the Philippine Air Force. He also announced the relief of the active generals and ordered the police investigating body to launch a probe on their alleged involvement in drugs.

Dela Rosa said he assured the police officials that they will be accorded an impartial investigation.

“I gave them the assurance na kahit na upperclass ko sila (that even if they are my upperclassmen), I am their father right now. As the father, I have to look for their welfare,” he said. IDL