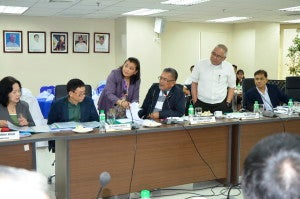 Speaking at Monday’s flag-raising ceremony at the Department of Interior and Local Government-National Police Commission Center in Quezon City, Sueno said the structure of the barangay-based anti-crime and anti-corruption groups would be patterned after the right-wing Alsa Masa of Davao City, the Naka Saka of Digos, Davao del Sur; and Kontra Force of South Cotabato.

“This time, we would like to focus more on the barangays. If you empower the barangays, that is where we will solve a lot of problems,” Sueno said, adding that the concept of anti-crime and anti-corruption groups was broached to him by civic leaders.

The Secretary said President Duterte knew about his plan. “I asked permission from the President. He said, ‘Okay, go ahead.’ He liked it. But we are coming up with guidelines so that these groups won’t be abused,” Sueno added.

Sueno said that unlike the Alsa Masa, Nakasaka or Kontra Force organizations that were armed and dreaded for being anti-communist or engaged in vigilante operations, the anti-crime and anti-corruption groups  would not be engaged in violence.

“It is for the people to organize themselves against illegal drugs, criminality and corruption in their barangays. This group can pinpoint the drug pusher, the drug addict or the drug lord or the erring barangay captain or mayor who is corrupt. I think if we are able to organize this group, unarmed, of course, it’s the people themselves who will take action against the offender. They won’t wait for the local authorities anymore,” he said.

Sueno said he would also most probably continue the “Bottom-up Budgeting” program of barangays that was launched by the previous administration.

“I like the idea of the BuB, that the people of the barangays, they plan what is good for them. We select the project and we implement the projects, if possible, no more intervention from above. They will not be dictated upon by the officials from above,” he said.

The Secretary said he was also considering making “public-private partnerships,” also launched by the previous administration, a possibility in the local level.

“PPPs nowadays are only for national government [projects]. They, who are above, are the ones planning what will be subjected to PPP. But a friend of mine said, ‘Why don’t we start from the bottom?’ So we will have Bottoms-Up PPP. Please come out, let the local governments outside of Metro Manila, let them come out with smaller PPPs,” he said.

Sueno added that he would consult National Economic and Development Authority (NEDA) director general Ernesto Pernia about his idea to involve barangays in economic planning.

Several congressmen from Mindanao, a delegation from Sultan Kudarat provincial officials and mayors led by Gov. Pax Mangudadatu, and officials from DILG’s attached agencies such as Napolcom, Bureau of Fire Protection and Bureau of Jail Management and Penology, attended the flag-raising.

Sueno served as governor of South Cotabato and mayor of its capital city Koronodal in ’80s and early ’90s. He ran unsuccessfully for vice president during the 1998 elections. He was the running mate of Emilio Osmeña of the Probinsya Muna Development Initiative (Promdi) party.