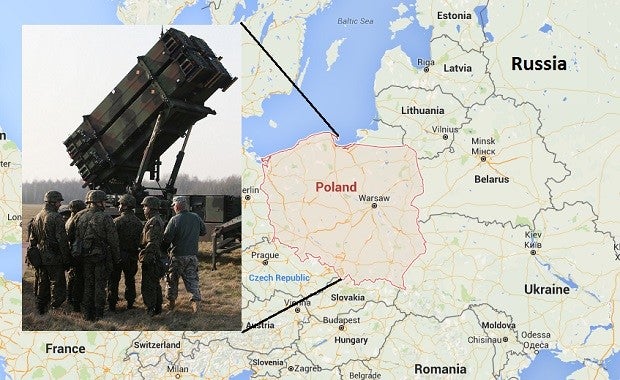 Inset shows US soldiers man a Patriot anti-missile, anti-air defense system in Sochaczew, Poland. Poland announced on Monday that it had signed a letter of intent with US defense contractor Raytheon for Warsaw to buy the system for 5 billion euros. AP

WARSAW, Poland — Polish Defense Minister Antoni Macierewicz on Monday said he would ink a letter of intent with US defense firm Raytheon to buy a Patriot missile system valued at an estimated 5 billion euros ($5.6 billion).

The EU member’s previous government had said in April it planned to buy the Patriot system, but soon after coming into power in November the current conservative administration placed a question mark over the purchase.

Macierewicz himself had said at the time: “The price is much higher, the delivery time much longer… in short, this contract is practically non-existent.”

On Monday Macierewicz said Poland was able to move ahead with the plan because Raytheon had pledged that 50 percent of the missile system spending would be on works “done in Poland by Polish arms firms”.

“That being the case, we’re signing the letter of intent,” Macierewicz said, quoted by the Polish news agency PAP.

He said that meant Raytheon would be the “most likely” maker of Poland’s missile defense system.

The defense ministry had said in April that it wanted to acquire eight missile batteries by 2025, with two of them to be delivered within three years of signing a deal.

The Eurosam consortium including MBDA France, MBDA Italy and France’s Thales Group had been the other party in the running for the missile deal.