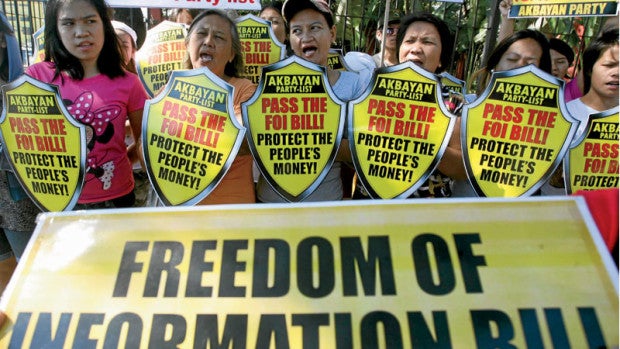 RALLY FOR FOI BILL Militants have been mounting rallies for many years to demand passage of the freedom of information bill in Congress. INQUIRER PHOTO

THE NEW occupant of Malacañang wants to accomplish in his first few days in office something his predecessor failed to deliver in six years.

President Duterte will sign within the next two weeks an executive order allowing freedom of information (FOI), giving the public an opportunity to access government records, Communications Secretary Martin Andanar said on Sunday.

The order, however, covers only offices under the executive branch of the government since it is just a presidential memorandum, Andanar said.

Interviewed over state-owned dzRB radio, Andanar said the President’s executive order was consistent with his campaign promise that his administration would be transparent and open to the public.

“This is a commitment of the President to us,” Andanar said.

“We are rushing the draft of the executive order. We will announce (its signing) within this week or next week,” he added.

Benigno “Noynoy” Aquino III vowed to enact a freedom of information  bill during his campaign for Malacañang in 2010, a promise he failed to keep despite having full control of Congress throughout his six-year term.

Many of his party mates in the once-dominant Liberal Party and his political allies also opposed the idea of providing the press and the public full access to documents pertaining to government projects and related matters.

Aquino’s failure to pass the FOI bill was among the black marks on his administration, which he anchored on transparency.

Andanar said President Duterte would also approve the creation of a “presidential task force against media killings” to deal with unabated violence against journalists.

The formation of the special task force comes weeks after Mr. Duterte’s controversial remarks that seemed to justify the murders of journalists in the Philippines.

Mr. Duterte’s statement that corrupt journalists are legitimate targets of assassination drew global criticism, but instead of apologizing, he banned the press from his events.

The creation of a task force on media killings also comes a few days after a radio commentator, known for his stinging tirades against illegal drugs and gambling, barely survived an assassination attempt in Surigao City.

The National Union of Journalists of the Philippines said Saturnino “Jan” Estanio of Radio Mindanao Network-dxRS and his 12-year-old son were wounded in the June 30 attack.

Jocelyn Ferol, RMN-dxRS program director, said Estanio claimed that personal grudge might have been behind the attack, but his commentaries on illegal drugs and gambling also might have invited it.

Andanar said he and Executive Secretary Salvador Medialdea were already working on a draft of the proposed executive order, which he himself was pushing as chief of the Presidential Communications Office.

A broadcast journalist before he was appointed by the President last month, Andanar said he reminded Mr. Duterte about his “promise to the media and the people” during the change of command ceremony at the Philippine National Police held at Camp Crame last week.

“We are just fine-tuning the executive order. Maybe next week we can already announce [the creation of the task force],” Andanar said.

“This is one of the things we’re doing to make our colleagues in the media at ease and stop the extrajudicial killings of members of the media,” he added. With a report from Karlos Manlupig, Inquirer Mindanao