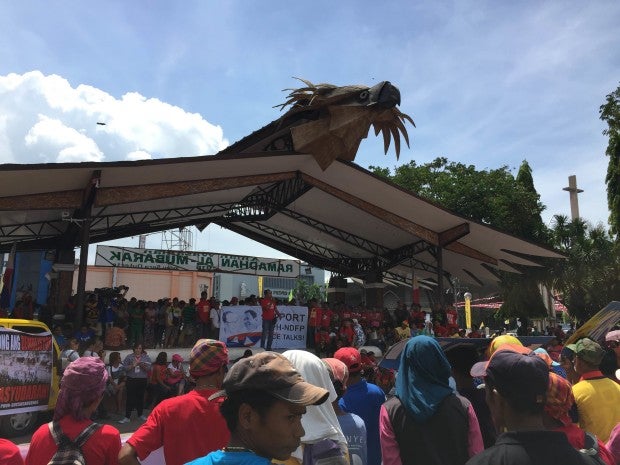 Several militant groups from all over Mindanao gathered at Rizal Park in Davao City to throw their support behind President Rodrigo Duterte. ARIES JOSEPH HEGINA/INQUIRER.net

DAVAO CITY, Philippines—Residents of this city staged several events to mark the inauguration of their longtime mayor as the 16th President of the country on Thursday.

At the Rizal Park near the City Hall, several militant groups staged a rally to convey their support for President Rodrigo Duterte’s pro-people pronouncements.

The groups supported the move of the President to engage the National Democratic Front of the Philippines (NDFP) in another round of peace talks.

Meanwhile, in the “Mallengke” market in Bangkerohan, a viewing party was set up for residents who want to watch Duterte’s inauguration on the big screen.

The owner of the Mallengke even distributed water and snacks for residents who gathered in the market to watch the inauguration live.

Those who watched the inauguration in the Mallengke cheered and clapped every time the name of the President was mentioned or his face was shown on television. 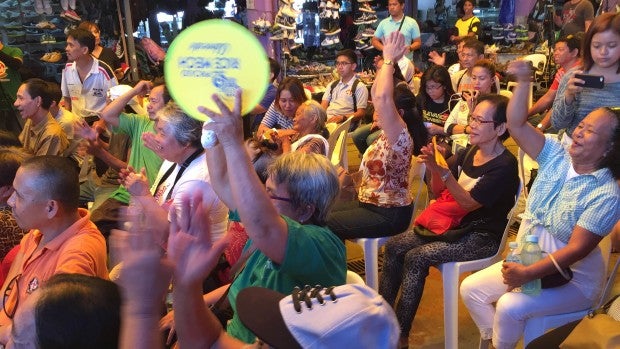 Rufino said that she shed tears because the said song was being played during Duterte’s campaign sorties and on the weekly television show “Gikan sa Masa, Para sa Masa.”

The resident said that since Duterte is now the father of the country, she just wishes that he would be able to deliver on his promises.

(I just wish that he would fulfill his promises to the Philippines so the whole country will be merry because Davao is already good on its own.)

Other residents here endured the heat as they settled at Quezon Park as they watched the inauguration on a big LCD screen.

Duterte, the first Mindanaoan president of the republic, served as this city mayor for 22 years. His daughter Sara took his place as the local chief executive of the city.  RAM

Read Next
Roxas tells Aquino: You did good for Filipinos
EDITORS' PICK
Heads may roll at BOC, says Palace if sugar smugglers are allowed to use recycled import permits
Palace: Biggest supermarkets in PH commit to sell sugar at P70 per kilo
What to watch out for when selecting a video surveillance solution
House energy committee chair Arroyo bats for cheap electricity
vivo brings to the Philippines a powerful smartphone with a slimmer body, the vivo Y02s for only PHP 6,499
DOH reports increase in daily COVID-19 deaths, mostly unvaxxed
MOST READ
Metro Manila’s No. 1 wanted man arrested, says NCRPO
Alyssa Valdez to miss Creamline’s AVC Cup campaign
Brian Poe-Llamanzares receives his PhD in Public Administration
Jordan Clarkson arrives in Manila to bolster Gilas Pilipinas
Don't miss out on the latest news and information.