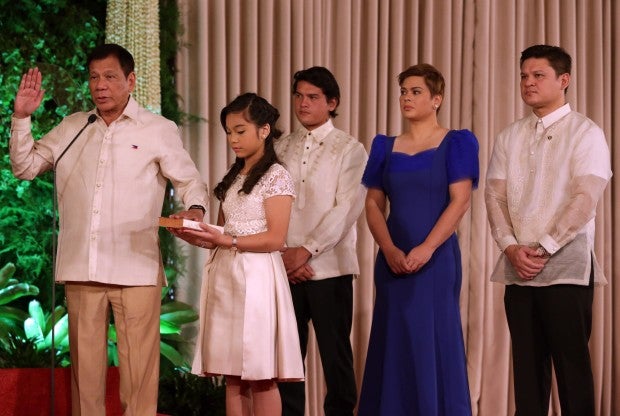 President-elect Rodrigo Roa Duterte takes his Oath of Office as the 16th President of the Republic of the Philippines with his children standing at his back as witnesses. Supreme Court Justice Bienvenido L. Reyes administers his oath. MALACAÑANG POOL PHOTO

MANILA — Members of the country’s new First Family broke Palace protocol to greet the supporters of President Rodrigo Duterte who had been waiting outside Malacañang on Thursday.

Duterte’s followers, many of them teenagers, shrieked as Duterte’s son Sebastian, who looked dapper in his barong Tagalog, stepped out of the Palace compound along with his siblings, Davao City Mayor Sara Duterte and Davao City Vice Mayor Paolo Duterte, at around 1 p.m.

The President’s children shook hands with about 50 of their father’s followers, some of whom flew from Davao, to personally thank them.

Their mother, Duterte’s former wife Elizabeth Zimmerman, joined them moments later. They also obliged requests for selfies with their supporters.

“You are so handsome Baste,” said a young woman, calling Sebastian by his nickname.

Members of the Presidential Security Group (PSG) who were stationed outside the Gate 5 of Malacañang said they were surprised upon seeing Duterte’s children coming out of the Palace gate.

“We were not told that they will be talking with the people here,” one of the PSG members told the Philippine Daily Inquirer.

In a brief interview, Zimmerman said they wanted to show their gratitude for the people who voted for Duterte and supported his campaign.

“I hope we will have a better future for our country,” Zimmerman said.  SFM