MORE: .@lenirobredo‘s voice cracks as she recalls her journey, thanks family, friends supporters in her speech pic.twitter.com/2NbpgFaz68

On her first day as the second highest official in the country, Vice President Maria Leonor “Leni” Robredo gave a reconciliatory speech and called for national unity during “these times of conflict and divisiveness.”

“The only way for all of us to realize our vision for our nation is to work together. During these times when there seem to be significant divisions and conflict in the world, the challenge is to come together, celebrate our commonalities and differences, and turn them all into strengths,” Robredo said.

In her 11-minute emotional message before her family, political allies and supporters from different sectors, Robredo vowed to be a Vice President who serves the people of different social status, beliefs and political party.

“We must do right by the people, not only by our own people. Our loyalties must lie on those we are sworn to serve, even at the cost of personal interest. This has always been the manner by which we have served; and it will remain that way for the rest of our lifetime,” Robredo said.

Towards the end of her speech, Robredo shared a quote from her late husband Jesse: “What brings us together as a nation is far more powerful than what pulls us apart.”

“During these times of conflict, unity is most important for our nation. We may come from different walks of life or different advocacies, but our dreams are the same: that each Filipino will live a dignified, prosperous life. This moment, today, is the start of the fulfillment of these dreams,” she said. 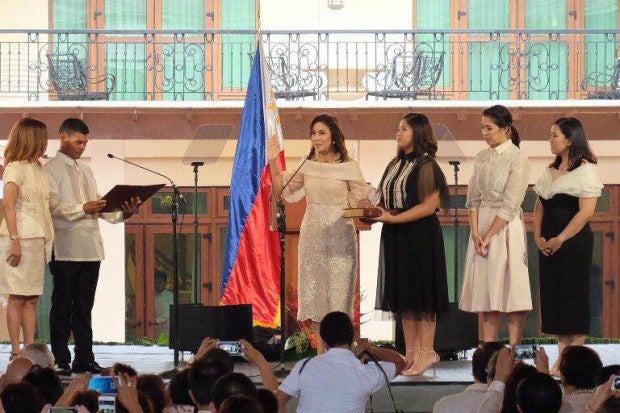 With her daughters Aika, Tricia and Jillian, Robredo took her oath before two village captains at her new office at the Quezon City Reception House on Tuesday morning. The ceremony lasted for less than an hour.

PROFILE: Who is Leni Robredo?

Robredo wore a rose-colored Filipiniana, an old dress designer Paul Cabral had remodelled for her. Native Filipino delicacies were served to the guests, also in Filipiniana attire, while Tagalog folk songs were played during the ceremony.

Office for the poor

True to her campaign promise, the former Camarines Sur lawmaker said she will create partnerships between the government and the private sector to improve the lives of those in the laylayan (fringes of society).

“The doors of the Office of the Vice Presidency are always open. Ours will be a listening office. We seek to unite the government and the private sector in a partnership for change, for those at the fringes of society that we have vowed to serve,” she said.

“Collaboration is today’s most important and powerful resource. In our world today, our most important work are the things that we can do together,” she said.

Robredo called on those who have “a passion for helping the poor” to come to her office and join her programs to alleviate widespread poverty in the country.

“We can accomplish many things in the next six years. We invite all who have a passion for helping the poor, for fixing systems for the poor, for unlocking barriers that perpetuate the status quo in the poorest areas of our country, to come to our office,” she said.

“We will streamline and bring all these efforts together so that we can extract the highest possible impact from each point of collaboration.

Even without a cabinet post, Robredo said she would prioritize hunger and food security, universal health care, rural development, education and people empowerment.

“In these areas, there is no time to lose because every day, there is real suffering on the ground. Our dream is to make a head way on easing that suffering as soon as we can. Join me. Together, let’s take another journey,” she said.

In her first 100 days, Robredo said she plans to go back to the farthest and the smallest villages in the country—just like what she did in Naga City as a human rights lawyer and as a former representative of her hometown in Congress.

“(T)o pray with you, to laugh and cry with you, and most of all to listen to the things that you want changed. This is what we did in Naga City and in our district—the place where I was born, where I built a family with the love of my life, the place that formed my awareness of society’s problems, and calcified in my mind the solutions that work best. The place that gave birth to myself as a public servant,” she said.

Started from the bottom

Robredo recalled the days before the May elections when she started with nothing—no budget to campaign and according to her detractors, no chance to win.

“If you recall, this is exactly the story of our journey together.  When we started, very few believed that we had a sliver of chance to win. But because of the contributions of each single individual— like Nanay Alberta who pawned her ring to help with the campaign, like the Sumilao farmers who walked again to Metro Manila, like the dad-and-son tandem we randomly witnessed fixing our destroyed posters—like each one of you who sacrificed so much to get us where we are now and believed when nobody believed,” she said.

“When we stand for what we believe in, when we are ready to sacrifice our personal interests, we can make the impossible possible,” she said.

As if echoing the battlecry of incoming President Rodrigo Duterte, Robredo said that the change the people want to see in our nation should begin within themselves.

“We hope that as we bring the Office of the Vice Presidency to your barangay, you will feel the government is truly there for you, and when you feel that, you will be inspired to spark your own change as well,” she said.

“When change begins in ourselves, the change we want to see in our nation will truly happen. We have seen this in the farmers and fisherfolk we have helped, in each battered woman we tried to empower, in each indigenous person, or barangay health worker,” Robredo said. IDL