Duterte agrees to meet with Robredo 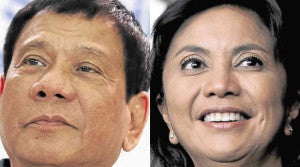 Christopher Go, Duterte’s executive assistant, said in an interview with TV5 on Wednesday that the meeting would have taken place here earlier this week but Robredo backed out due to a trip overseas.

“So hindi hard to get. Pumayag eh,” Go said at the Tactical Operations Group grounds inside the Davao International Airport here, where Duterte was to take off for Manila.  SFM