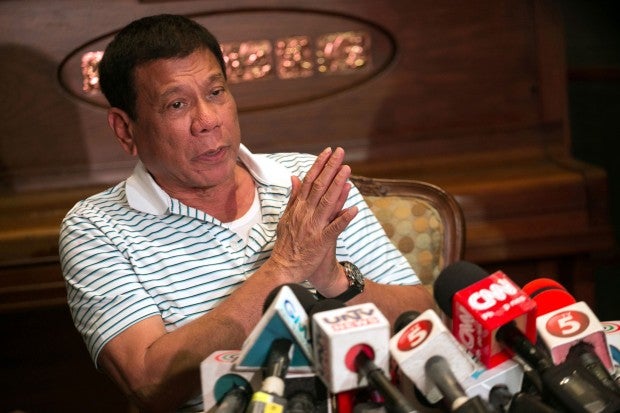 If Rodrigo Duterte sticks to what he rehearsed on Tuesday night, he will be delivering a short and expletive-free speech, his first after he is sworn in as the country’s 16th President at noon Thursday.

A source, who asked not to be named as he was not authorized to speak on the matter, said the prepared speech would run for about 12 minutes.

“But our estimate is it will be 15 minutes long, including pauses for the expected applause,” a source told the Philippine Daily Inquirer.

Duterte had a read-through of his speech at the “Malacañang of the South” in Panacan here on Tuesday night.

“He even laughed when at first reading the speech went over the five-minute mark,” the source said.

Duterte earlier announced that his inaugural speech would only be five minutes long. He, however, later said he was joking when he said that. Duterte is known for his long speeches, marked by rambling anecdotes, rants, curses and jokes.

“Of course, the prepared speech doesn’t have curses,” the source said.

But the source said the “rehearsal” had nothing to do with Duterte being nervous about delivering his first speech as President.

“He’s not nervous at all. It was conducted for him to get used to looking at the teleprompter,” the source said.

“Besides, the president doesn’t need coaching. It was all for him to get used to reading the teleprompter,” the source added.

Another source who witnessed the “rehearsal” Tuesday night, said the speech was in English.

“But he was good,” the source said, adding that it might be the “metamorphosis” that Duterte had promised upon assuming the presidency.

In his June 2 press conference, Duterte admitted that he was “enjoying” the remaining days as a rude person before taking his oath.

“When I become president, when I take my oath of office… ibang storya na yun (that will be a different story) … There will be a metamorphosis,” Duterte said.

The June 2 press conference was the last that Duterte held before he announced that he was not holding any more until the end of his term.  This came after the France-based Reporters Without Borders called for a boycott on his future conferences following comments from the incoming president that some journalists were killed because they were corrupt.

Duterte will most likely wear a Barong Tagalog.

Duterte will be choosing from the 12 Barong Tagalog that Chardin Davao, a high-end fashion house here, made for him.

“We are still not sure which of the Barong that we made will the President wear,” Bobby Castillo, one of the designers at Chardin Davao said.

Chardin Davao also made a green gown for Honeylet Avanceña, Duterte’s common-law-wife, and a beige dress for their daughter Veronica.

Veronica will be holding the bible when her father is sworn in as president.

Elizabeth Zimmerman, Duterte’s former wife, will be wearing a pink gown by local designer Silverio Anglacer. Zimmerman, in an earlier interview, said she chose pink because the color has become a symbold for breast cancer awareness. Zimmerman is battling Stage 3 breast cancer.

Sara Duterte-Carpio, the incoming Davao City mayor and Duterte’s daughter with Zimmerman, will be wearing a royal blue gown made by Anglacer.

Sebastian, the youngest son of Duterte and Zimmerman, will be wearing a Mindanao silk Barong made by the Davao Fashion and Design Council.

On Thursday morning, guests will gather at the Philippine International Convention Center where breakfast will be served. They will then a bus for Malacañang where Duterte will take his oath.  SFM