#INQFact: Where did past Philippine Presidents live? | Inquirer News

#INQFact: Where did past Philippine Presidents live?

President Corazon C. Aquino lived in what came to be known as the Arlegui Mansion but held office at Malacañang’s Premier Guest House.

Cory’s successor, Fidel V. Ramos, also lived in Arlegui but held office in the Palace. The Arlegui mansion, owned by the Laperal family, was restored by National Artist Leandro Locsin in 1971. Its original owner, Tarcila Laperal-Mendoza, was evict- ed from her own home on orders of the late dictator Ferdinand Marcos at the height of martial law.

In October 2007, the Supreme Court’s First Division, in a unanimous decision, ordered the government to return the property to Mendoza. The court also declared that once the ruling became final, the government should pay Mendoza a monthly rental of P20,000 starting July 1975 plus annual interest until the property was returned to its rightful owners. The ruling became final on Dec. 16, 2008.

In July 2010, ABS-CBN News reported that the Arlegui mansion was finally returned to its owners. 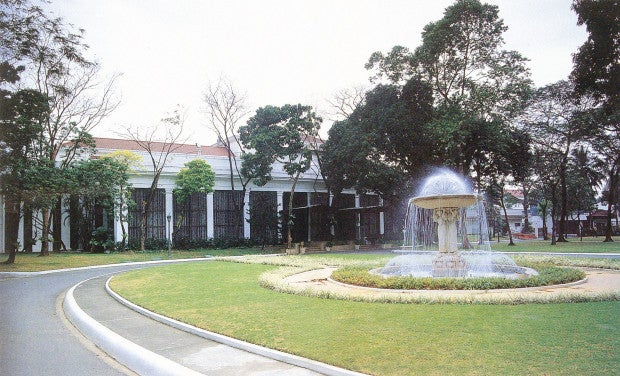 PHOTO FROM THE BOOK “MALACAÑAN PALACE: THE OFFICIAL ILLUSTRATED HISTORY”

The Premier Guest House at the west end of the Palace grounds where President Cory Aquino held office, used to be the servants’ quarters until it was remodeled in 1975 in time for the International Monetary Fund-World Bank Boards of Governors meeting.

In 2010, President Aquino chose the prewar Bahay Pangarap (House of Dream) across the Pasig River from Malacañang as his residence.

Located near the presidential golf course, Bahay Pangarap is described as having a “resort ambience,” complete with a swimming pool and a Balinese-style garden. It was renovated to add three more bedrooms to the existing master bedroom.

In the past, Bahay Pangarap served as a venue for formal dinners and other social functions.