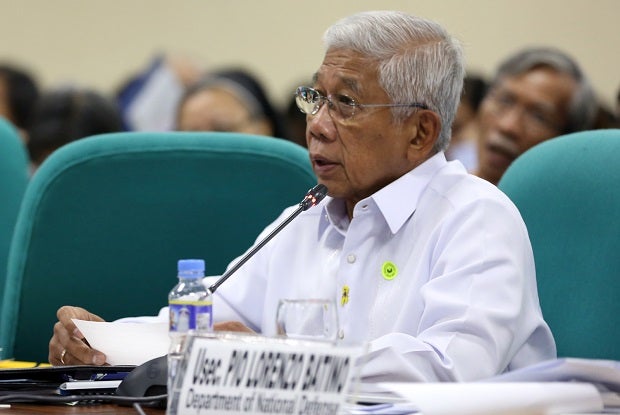 Troops should be granted “emergency powers” to effectively eradicate the Abu Sayyaf group, which is currently holding a number of foreign hostages, outgoing Defense Secretary Voltaire Gazmin said on Wednesday.

Speaking at his last sit-down interview in Camp Aguinaldo, Gazmin stressed that imposing limited martial law was the best solution to crush the Abu Sayyaf, a small gang of self-styled militants wanted for a spate of kidnappings and other atrocities in the country.

FEATURED STORIES
NEWSINFO
AFP to apologize to UP alum falsely included in list of NPA members — Lorenzana
NEWSINFO
Wife stabs husband after seeing her younger self in old photos, thought he was cheating
NEWSINFO
AFP’s Civil-Military Office apologizes for list of UP alumni who ‘joined’ NPA

The two were abducted in September along with Norwegian Kjartan Sekkingstad and Filipino Marites Flor. Flor was recently released but Sekkingstad remains in captivity, and his health is said to be failing. The Abu Sayyaf is also believed to be holding captive seven Indonesians they seized last week off Sulu.

Gazmin confirmed talks were ongoing to allow Indonesian troops to escort vessels sailing into Philippine waters to prevent similar attacks in the future. He said Malaysia was also involved in the discussions.

However, he clarified that foreign troops would not be allowed to help in rescue operations in Philippine territories, without prior coordination with Manila or if not in pursuit operations across borders.

‘They can’t just come in’

“For this particular incident, they can’t just come in. We can ask for help in terms of exchange of information… but for for them to come and help in the rescue, that’s not allowed,” Gazmin said.

Gazmin also discouraged governments from paying ransom, because the money fuels the trade all the more. He said a group is paid by the Abu Sayyaf to act as “spotters” for possible victims. Once seized, the victims are then taken to a shelter where another group negotiates ransom.

“We need to solve this. It’s a big issue that destroys our image in the international community. And they [other countries] need to be part of the arrangements because they are also victimized,” Gazmin said.

Read Next
#INQFact: Where did past Philippine Presidents live?
EDITORS' PICK
New Year, New Rediscoveries
Acer Philippines welcomes you to its first flagship store
More than 150 National Guard in Washington for Biden inauguration test positive for coronavirus
Pope Francis to miss events due to new flare up of leg pain—Vatican
PNP’s Covid-19 cases jump to 9,809; 52 new infections logged
Is your company a growth champion? Stand up and be recognized!
MOST READ
Dustin Poirier knocks out Conor McGregor at UFC 257
Ellen DeGeneres, too, is baffled by viral Filipino soda ad
AFP to apologize to UP alum falsely included in list of NPA members — Lorenzana
WATCH: Alex Gonzaga joined by family in Amanpulo honeymoon
Don't miss out on the latest news and information.