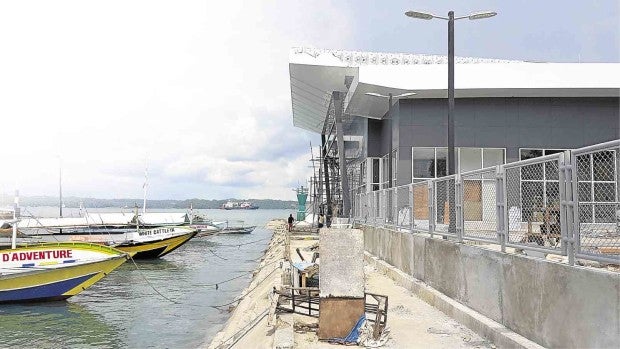 ILOILO CITY—High-ranking officials of Guimaras province failed to obtain a temporary restraining order (TRO) to stop a boat terminal project that would raise passenger fees to P11, but they expressed confidence the case they filed against the project would prosper.

Judge Rosario Dris-Villanueva, of the Regional Trial Court Branch 65, denied the petition for a 72-hour TRO against the Guimaras-Iloilo ferry terminal, saying there was no urgency to issue the order.

The opening of the terminal complex was set for June 24 but was moved to July.

The Guimaras provincial government, which filed the suit against the new terminal, withdrew its petition for a TRO after the Iloilo City government gave assurances that two wharves, which are being used as ports for passengers travelling from Guimaras to this city, would be kept open.

Awaiting action by the court is the petition for an injunction against the project.

Respondents in the case include the Iloilo City government represented by Mayor Jed Patrick Mabilog and the city council, and the DoubleDragon Properties Corp., represented by its president, Ferdinand Sia.

The collection of an P11 terminal fee is a provision in the joint venture agreement between the Iloilo City government and DoubleDragon.

Guimaras Gov. Samuel Gumarin said the rates are too high for some 25,000 to 27,000 residents who travel to Iloilo daily.

“This will affect our economy because prices of goods will increase [due to increased transportation cost],” Gumarin said in an earlier interview.

John Edward Gando, Guimaras vice governor-elect and provincial board member, said the petitioners are also opposing a plan to close the two wharves—Ortiz and Parola—that passengers are currently using in their travels to the Buenavista and Jordan ports in Guimaras.

The new terminal is on a 1.3-hectare government land near the port of Iloilo that was developed by DoubleDragon under a 25-year joint venture agreement with the city government.