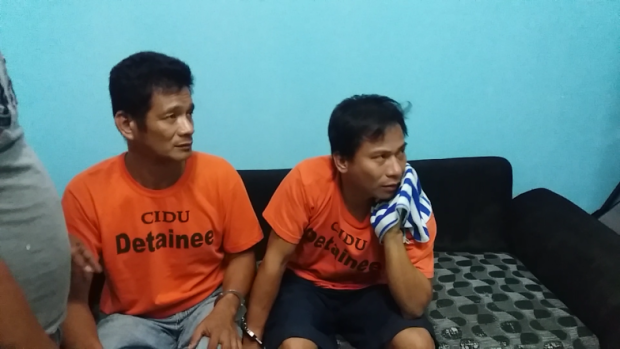 Wilfredo Lorenzo, the “colorum” van driver accused of raping and robbing several female passengers, had a policeman for an “employer.”

This was according to Lorenzo’s own lawyer, who on Friday succeeded in having his client transferred from the Quezon City Police District (QCPD) headquarters to the city jail, after the suspect’s family members expressed fears about his safety.

Lorenzo’s fellow suspect, Alfie Turado, was shot dead while in QCPD custody on June 17 after he allegedly tried to grab the gun of one of his escorts.

Lorenzo was supposed to be arraigned on Friday for drug possession before Judge Nadine Jessica Corazon Fama of Quezon City Regional Trial Court-Branch 79. But his counsel, Berteni Causing, moved for a reinvestigation.

In an Inquirer interview, Causing said the name of Lorenzo’s employer cropped up—a police officer identified as Gregorio Bangsil—during his interview with his client, particularly when the suspect was asked to recall how he was arrested by the QCPD on June 13.

Earlier that day, he said, Lorenzo was told by Bangsil to come to the latter’s house. When he arrived, the driver was surprised to see policemen already waiting for him.

A check with the records of the Philippine National Police showed that a “PO2 Gregorio Bangsil” is on active duty and currently assigned to the QCPD-Cubao station.

Calls to various police stations confirmed that Bangsil was recently transferred to the QCPD Fairview station. He could not be reached for comment at press time.

Supt. Alex Alberto, the Fairview station commander, said: “If what (Lorenzo) is saying is true, it would be good to investigate that. But usually suspects who have been cornered would implicate others who may not be involved. The operator was not involved in the crime.”

But Ernesto Francisco, the lawyer of two women who had identified Lorenzo as their rapist, had a different stand on the matter.

“The fact that the QCPD kept silent about the owner of the colorum van, who turned out to be a police officer assigned to QCPD and did not investigate him, is tantamount to a cover-up,” Francisco told the Inquirer.

“If we want this series of robbery and rape cases really investigated and stopped, the National Bureau of Investigation, under the Duterte administration, should come in,” Francisco said.

Supt. Rodelio Marcelo, QCPD-Criminal Investigation and Detection Unit (QCPD-CIDU) chief, said he saw no reason to investigate the registered owner of the colorum van (ALA 6980) who had no participation in the crime and who had cooperated with the police in Lorenzo’s arrest.

Based on records of the Land Transportation Office (LTO), the van  is registered to Roberto Cardenas Jr.

When seized by the police, the vehicle had a windshield sticker that reads “www.bangsil.club.philippines.”

Marcelo said the police have referred the vehicle to the LTO and the Land Transportation Franchising and Regulatory Board to determine administrative liability.

Also on Friday, Lorenzo was transferred from the custody of the QCPD-CIDU to the city jail, which is under Bureau of Jail Management and Penology, based on a commitment order issued by Judge Fama.

This was after Lorenzo’s relatives requested his transfer out of fear that he would end up like Turado, Causing said.

Causing said Lorenzo insisted on having his hands handcuffed behind him during the transfer and that he also denied being in possession of illegal drugs when he was arrested.

Lorenzo’s wife and relatives took turns watching over Lorenzo while he was in detention at the QCPD-CIDU, he said. TVJ