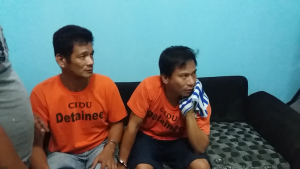 Wilfredo Lorenzo (right) and Rey Diaz are presented by the Quezon City Police District to the media on Thursday, June 23, 2016, after a sixth victim tagged them in a series of rapes and robberies targeting female commuters. (Photo by Erika Sauler, INQUIRER)

MANILA — Another victim has come forward to pin Wilfredo Lorenzo, who is currently detained at the Quezon City Police District, on a string of rape and robbery complaints targeting female passengers coming off from work.

“Faith,” the sixth complainant’s alias, whacked and kicked Lorenzo during a confrontation on Thursday wherein she positively identified him and his recently arrested cohort, Rey Diaz.

Faith told police she hailed a taxi in Makati City on April 5, 2:30 a.m. and identified Lorenzo as the driver.

Lorenzo then robbed the victim of her cash, ATM and cell phone and then raped her while the taxi was traversing C-5 Road going to Quezon City.

Supt. Rodelio Marcelo, chief of QCPD Criminal Investigation and Detection Unit (CIDU), said the victim was dumped behind a nightclub near Quezon Avenue after about two hours.

Police withheld the details of the taxi company pending investigation.

Lorenzo, 36, was arrested on June 13 in Barangay Kaligayahan, Quezon City, after two women filed a complaint that they were robbed and raped inside a “colorum” van for about four hours from 10 p.m. of June 10 up to 2 a.m. of June 11.

Lorenzo had another accomplice in that attack, Alfie Turado, who was killed inside a police van after allegedly grabbing the gun of his escort on June 18.

Two more women surfaced to file a robbery complaint against Lorenzo after seeing him on the news. They were sexually assaulted in March and they said Lorenzo acted alone.

After that, another woman went to QCPD CIDU and said she was detained and sexually abused for almost a month by Lorenzo in 2003 when she was just a teenager. She was impregnated and the child is now 13 years old.

The police have given alphabetical aliases to the victims—Annie, Betty, Cris, Dalia, Elena, and now Faith.

Esquivel said it appeared that suspect Lorenzo had a fetish of removing the socks of his rape victims and would use these to tie their hands or stuff their mouth.

“And the vehicle should be moving. Based on investigation, the motive primarily is robbery to sustain their illegal drug use. Then it turns into rape,” Esquivel said, adding that Diaz would be considered accessory to the crime in Faith’s case.

Diaz, 46, taxi driver, native of Iloilo, and residing in Marilao, Bulacan, was arrested around 1 a.m. Thursday while urinating along Sinagtala Street, Barangay Bahay Toro, Quezon City, a violation of a city ordinance. A knife was also found tucked in his waist when frisked.

Esquivel said Diaz fit the description given by Faith when she first went to QCPD on Saturday.  SFM

Read Next
Ex-LWUA execs in hot water over excessive expenses
EDITORS' PICK
‘NCR Plus’ to be under MECQ starting April 12 until April 30 — Palace
Pru Life UK receives four golden arrows for solid corporate governance
Pre-order the new vivo Y20s [G] to get a free TWS earphone
Malls adjust ‘NCR Plus’ operating hours for April 12-30 MECQ
Speed up your game with the new vivo Y20s [G]
Metro Manila to have shortened curfew hours from 8 p.m. to 5 a.m. under MECQ
MOST READ
Stop ‘creeping occupation’ of ‘militia’ boats in WPS, Pacquiao asks China
Bea Alonzo clarifies status of her relationship with Dominic Roque
Convicted former aide of Sen. Bong Revilla dies — BuCor
Locsin to China: ‘Then move out’
Don't miss out on the latest news and information.