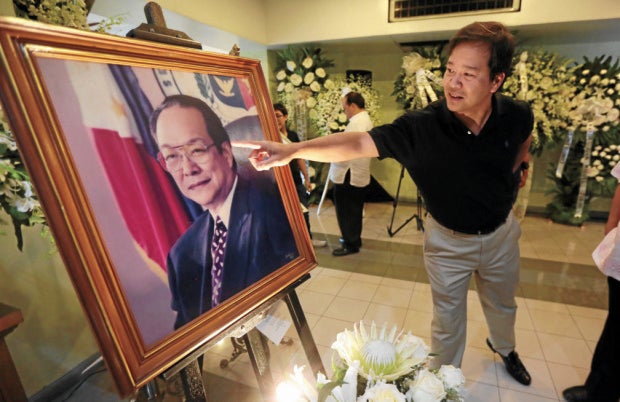 Emmanuel Maceda, eldest son of the late Sen. Ernesto Maceda, points to the glasses in the portrait of his father during the wake of Sen. Maceda at Mt. Carmel Church in Quezon City on Tuesday, June 21, 2016. INQUIRER PHOTO / GRIG C. MONTEGRANDE

Speaker Feliciano Belmonte Jr. on Tuesday mourned the passing of former senator Ernesto Maceda, who he considers a close friend. Maceda died Monday evening after undergoing gall-bladder surgery at the age of 81.

In a statement, Belmonte said Maceda was his close friend. Belmonte recounted how he offered his salary when he supported Maceda’s campaign as Manila councilor when Maceda was just 23 years old. Maceda won.

“Ernie was also a columnist and a very close friend to me. I remember fondly how I willingly offered my salary for a month to fully support his campaign and entry into politics when he ran for Councilor of Manila.  He was eventually hailed as the No. 1 Councilor there at the age of 23,” Belmonte said.

“My colleagues in the House of Representatives and my family wish to extend our sympathy and prayers to the family of Ernesto M. Maceda,” he added.

According to the statement, Maceda was known as “Mr. Expose” and an outspoken politician.

Maceda served as Secretary of Commerce and Industry, Executive Secretary and Presidential Assistant on Community Development during the Marcos administration.

He was also Philippine ambassador to the United States from 1998 to 2001.

“Indeed, Ernie was a colorful politician with an equally colorful personality. We wish him eternal peace and eternal rest and thank him for his invaluable service to the Filipino people,” Belmonte said.

Maceda ran in the 2013 senatorial elections under the United Nationalist Alliance but lost. TVJ

Read Next
Belmonte: Ledac could have stopped vetoed bills
EDITORS' PICK
House energy committee chair Arroyo bats for cheap electricity
Reignite your passion with the vivo Y35
Individuals affected by ‘Karding’ now over 157,000
Karding damage to infrastructure at P23M
Bongbong Marcos says PH ‘open for business’ with new Clark Airport terminal
Newbie gamers are in for a treat with the power-packed feature of vivo Y16
MOST READ
LPA enters PAR, may develop into tropical depression
Angelica Panganiban ‘duguan, sugatang mom’ one week into breastfeeding
Soldiers are not errand boys, Tulfo tells defense officials
Charges readied vs gov’t guard with P290-M deposits
Don't miss out on the latest news and information.