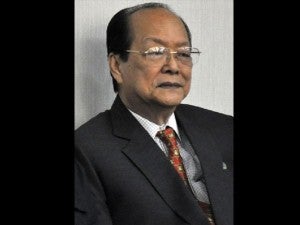 (UPDATE) Former Senate President Ernesto Maceda has passed away due to multiple organ failure. He was 81.

Maceda’s son Edmond, in a text message to INQUIRER.net, said the ex-Senator died at 8:58 p.m. at St. Luke’s Medical Center in Quezon City.

“At 8:58 this evening, my father passed away due to multiple organ failure. He was 81 years old and lived a life dedicated to his family and public service,” Edmond said.

The young Maceda said his wake will start on Tuesday at 3 p.m. at Mount Carmel Shrine in Quezon City.

Edmond said Maceda will be interred on Saturday, June 25.

“We ask the public for prayers for the eternal repose of his soul,” he added.

READ: Maceda family: We though he’s good for another 10 years or more

In an earlier interview, Edmond said his father may have fell into a comatose state due to complications from bleeding after his gallbladder removal surgery.

“He was conscious. He was mentally sharp. He can’t speak because there was a tube in his mouth but he’s happy he made it through the operation,” recalled his son.

That night, Edmond said, Maceda went to sleep in a good state.

But he later suffered internal bleeding after his bladder was removed, affecting his heart and kidney. He also underwent a pacemaker surgery to keep his heart beating.

“I got news this morning that he became unconscious. When I arrived (in the hospital), the doctors were trying to revive his heart. I guess his heart failed. It wouldn’t respond,” Edmond said.

Shortly before Monday noon, Jimmy Policarpio, Maceda’s chief of staff for 16 years, said Maceda was deemed “clinically dead” with a life support machine connected to him.

Around 3 p.m., Edmond told INQUIRER.net that chances of his father recovering were very slim.

He said he and his siblings were just waiting for their eldest brother to arrive from Hong Kong before they disconnect the life support machine.

The former Senate leader started his stint in the Senate in 1971 but his term was cut short when martial law was declared in 1972.

He was then appointed ambassador to the United States by former President Joseph Estrada from 1999 to 2001. TVJ