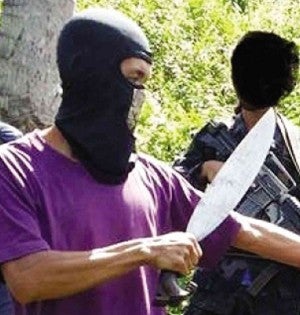 UNDATED photo from the private terrorism monitor SITE Intelligence Group on Sept. 23 is reported to show members of the Abu Sayyaf who had held captive two German nationals released allegedly after payment of a P250-million ransom. AFP/SITE INTELLIGENCE GROUP

ZAMBOANGA CITY – A suspected Abu Sayyaf bandit tagged in the 2014 massacre in Talipao, Sulu escaped from police custody while being transferred to a regular jail on Tuesday.

Supt. Luisito Magnaye, the Zamboanga City Police director, said Alhnur Usup, also known as Arab-arab, Arab Puti and Aldin Usup, was being transported with another suspected bandit to the Zamboanga City Reformatory Center when he jumped out of the vehicle the police used.

The other bandit, identified as Jamal Labuan, also tried but failed to escape.

Magnaye described Usup as among suspects in the massacre of over two dozen people – including a nine-month old baby – in Talipao on August 2, 2014.

He was arrested here on June 2.

“While he was about to be committed to the city jail, he escaped,” Magnaye said.

He said the prisoners being transported were only secured by one cop, SPO4 Montasil Amirul. The vehicle, an L300 van, was being driven by SPO1 Mario Lafuente. Both police officers were assigned with the city police’s intelligence division.

Magnaye said the two police personnel were asked to explain how the prisoner managed to escape.

He said both of them could face sanction.

“We’ll file a case against them,” he said.

Supt. Jomarie Albarico of the Central Police Station said the two bandits were initially placed at their detention cell “by the intelligence division.”

“They didn’t ask for additional (security) personnel (during the transfer),” Albarico said of the incident.  SFM/rga