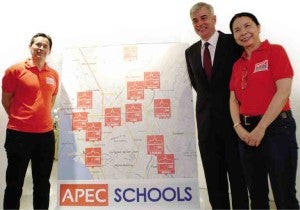 Lui said that under their agreement,  SHS students from their schools who would like to proceed to college, would be given “priority admission” to the five tertiary education institutions to ensure a seamless transfer.

“Educational partnerships between high schools and institutions for higher education provide a powerful means for enhancing student achievement and cultivating interest to pursue college education,” APEC Schools chair and Ayala Education Inc. CEO Fred Ayala said in a statement. “We want to ensure that all members of this partnership share a common vision and are accountable for achieving mutually identified goals, which ultimately benefits our youth.”

Ayala maintained that as part of their support to the Aquino administration’s landmark K to 12 education reform program, they have been working to ensure that all of their SHS students would be “ready to hit the ground running by the time they graduate” and would be “able to secure professional employment and meet the growing economic demand for a highly skilled, globally competitive and knowledgeable workforce.”

Launched in 2013, APEC Schools is a chain of low-cost private secondary schools with over 10,000 students from Grades 7 to 12 in 29 branches in Metro Manila, Rizal, Cavite and Batangas. It is a partnership between Ayala Corp.’s education arm Ayala Education Inc. and United Kingdom-based learning company Pearson PLC. (Report filed by Arianne Cardiño, Inquirer trainee)  SFM