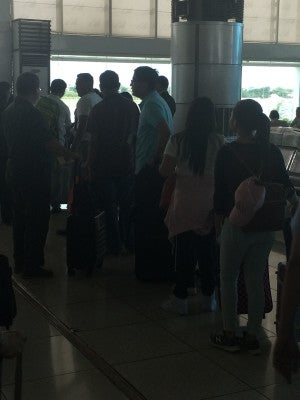 Cebu Pacific CEO Lance Gokengwei (5th from left, side view to the camera), joins the line for boarding a Philippine Airlines Flight to Davao City on June 19, 2016. In taking PAL, he had hoped not to be delayed. The flight was delayed for about two hours. (Photo by Ben O. De Vera, INQUIRER)

Gokongwei was first spotted waiting to board PAL flight PR 1817, as he was scheduled to attend the two-day consultative meeting of the country’s top businessmen and President-elect Rodrigo R. Duterte’s incoming economic managers.  The meeting will start Monday (June 20).

Gokongwei told a co-passenger that he booked PAL “because our (CebuPac’s) 3 p.m. flight gets delayed.”

His PAL flight was nonetheless also delayed — initially, the departure time was at 3 p.m., but later on moved to 4:30 p.m.

The plane, however, was unable to leave Ninoy Aquino International Airport’s Terminal 2 until around 5:15 p.m.

The businessman, just like an ordinary passenger, was later seen reading a newspaper — the Philippine Daily Inquirer, his copy provided in-flight. He also took a nap during the one-and-a-half hour flight.

Upon arriving in Davao City at around 6:40 p.m., he was also welcomed by CebuPac personnel, before he reportedly proceeded to dinner with Duterte at Marco Polo Hotel.  SFM