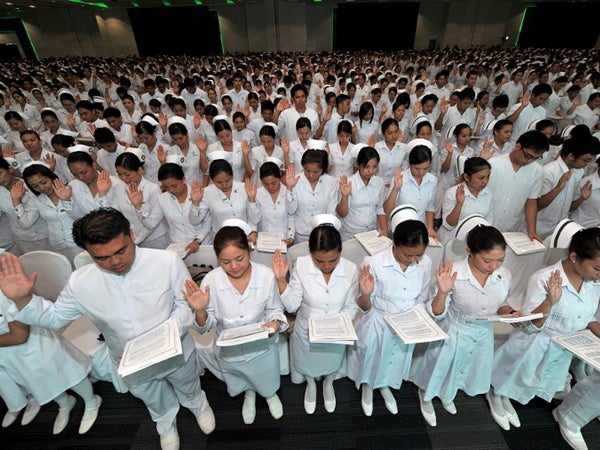 President Aquino has vetoed two more bills, one of them pushing for yet another increase in the salaries of nurses and another seeking the condonation of unpaid income taxes of local water districts, Malacañang announced on Thursday, two weeks before the end of his term.

The President said he vetoed SB 2581/HB 3675, or the proposed law “removing the conditions for the condonation of all unpaid income taxes due from local water districts,” because of its “serious fiscal policy implications.”

He said the bill sought to remove the “laudable intent” of another law, Republic Act No. 10026, which grants tax reprieve only to local water districts that are “financially incapable and committed to instituting fiscal reforms.”

The bill could also “undermine the government’s strict tax collection effort,” he added.

Mr. Aquino emphasized that the bill “sends a message to errant taxpayers that delinquency is acceptable since amnesty or condonation may be given anyway, even without benefit of proper documentation.”

“While we recognize the objective of the bill to promote the well-being of the country’s nurses, we cannot support the bill in its present form because of its dire financial consequences,” the President said in his veto message released on Thursday.

Mr. Aquino said Executive Order No. 201, signed earlier this year, had already increased the base salaries of government employees, including nurses and other health workers.

The EO increased the annual salary of government nurses from P228,924.00 to P344,074.00, which does not include other benefits and allowances nurses receive under the Magna Carta of Public Health.

The President explained that the proposed salary increase “will not only undermine the existing salary structure of medical and health practitioners but will also cause wage distortion not only among health professionals but also among other professionals in government.”

Increasing the entry level salary for nurses by four grades, as the proposed law would have done, will place nurses “over and above their other similarly situated counterparts in the health profession and government service,” the President said.

With the four-grade increase, from Salary Grade 11 to 15, the President said optometrists, dentists, and doctors would end up receiving less than the nurses.

The entry level of optometrists, dentists, and doctors are at Salary Grades 12, 14, and 16, respectively.

Nurses, medical technologists, pharmacists, laboratory technicians, physical therapists, nutritionists, and midwives, among others, are professionals who have taken a four-year course whose entry level salaries are pegged at Salary Grade 11, or a monthly salary of P19,077 under EO 201.

“Such preferential treatment in favor of nurses over and above other health professionals and professionals in the government service appears unconscionable and violative of the equal protection clause enshrined in the Philippine Constitution,” Mr. Aquino said.

The President said that to avoid an “inequitable scenario brought about by the wage distortion, the salaries of health professionals and similarly situated professionals in the government service should simultaneously be considered for increase proportionate to the increase given to entry level nurses.”

Mr. Aquino also said that the proposed increase “seemingly disregarded” the financial capacity of most local government hospitals, voicing concern that they might be unable to comply with the raise because the Local Government Code gives a ceiling of 40-45 percent for personnel services, depending on the income class of the local government.

The same goes with private hospitals and other nongovernment health institutions, which are mandated to offer an entry level salary to nurses equivalent to Salary Grade 15, the President said.

Sen. Antonio Trillanes IV, the bill’s main sponsor, said he planned to resurrect the measure in the 17th Congress.

“This could have been the measure that would improve our healthcare sector and help stop the mass exodus of our nurses to other countries,” he said. With reports from Christine O. Avendaño and Leila B. Salaverria