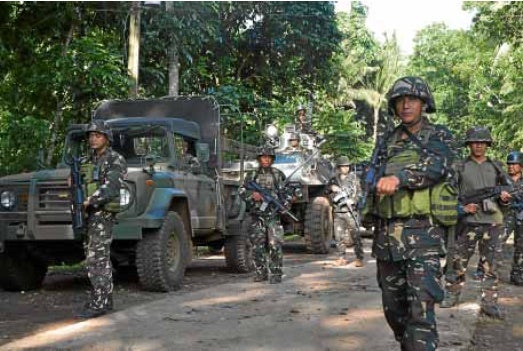 ZAMBOANGA CITY—The military has deployed 10 battalions to “selected target areas” in Sulu province to go after the Abu Sayyaf kidnappers who beheaded two Canadian hostages in the last two months after failing to get their ransom demand.

Maj. Filemon Tan Jr., spokesperson for the Western Mindanao Command, said all resources from land, sea and air had been made available for the mission, which could involve some 5,000 troops belonging to the Marines, Army, Air Force and Navy, including their Special Forces.

“We have about 10 battalions, including Marines. Ten battalions of two brigades. All service commands are involved,” Tan said.

But he clarified that the operations would not be on a “wide scale,” but would focus on areas known to be supportive of the Abu Sayyaf.

“We will go to the communities known to provide refuge to bandits,” he said. “There are selected target areas. These bandits have relatives and they hide in the populace.”

On Monday, Abu Sayyaf bandits beheaded Canadian Robert Hall after the P600-million ransom money they had demanded was not delivered. Another Canadian, John Ridsdel, suffered the same fate on April 25.

All were kidnapped in an exclusive marina in Island Garden City of Samal in Davao del Norte province on Sept. 21 last year.

Police were checking “an intelligence advisory from the higher office” that four Malaysians were abducted by armed men in Sabah, Malaysia, on Wednesday night.

Tan refused to give the exact number of soldiers or the units deployed in Sulu, and where the operations would be.

“Just imagine our operation maps are filled with pins,” he said. Pins indicate deployment of troops on the ground.

Abu Raami, spokesperson for the Abu Sayyaf, said his group would make it hard for the government troops to locate them.

“We know the terrain,” he said in a phone interview on Thursday morning.

Raami said that every time a military aircraft would hover over them, “we run for cover, we put off all communications and we hide.”

On Wednesday, President Aquino visited Jolo, Sulu, to check on the operations of the military against the Abu Sayyaf.

Sulu Vice Gov. Abdusakur Tan said he chose to snub the President “because he is responsible why all these problems are besetting our place.”

Tan said Mr. Aquino did not consider his earlier recommendation to involve the communities in the campaign against the Abu Sayyaf. “Instead … he poured more troops and changed the police officers and replaced officers who were not functioning.”

On Mr. Aquino’s visit, Tan said: “Who do you think will listen to him? Coming down here when he has only 15 days left (as President).”

“That is what we call ‘too late to play a hero.’ Lives have been wasted, resources reportedly poured but we never saw it, never felt it,” said the vice governor.

In Manila, Sen. Bam Aquino said yesterday that it was time for the government to do all it could to crush the Abu Sayyaf in the wake of threats that it might behead another hostage if its ransom demand was not met.

Senator Aquino lamented that the Abu Sayyaf already wrought extensive damage on the country’s image, economy, tourism industry, and the way of the life in several areas in Mindanao.

“It is time to take the appropriate action to pulverize the bandit group at the earliest possible time,” he said.

“We support any action of the present government and the incoming administration of President-elect Duterte as long as it conforms with the law.” With a report from Leila B. Salaverria