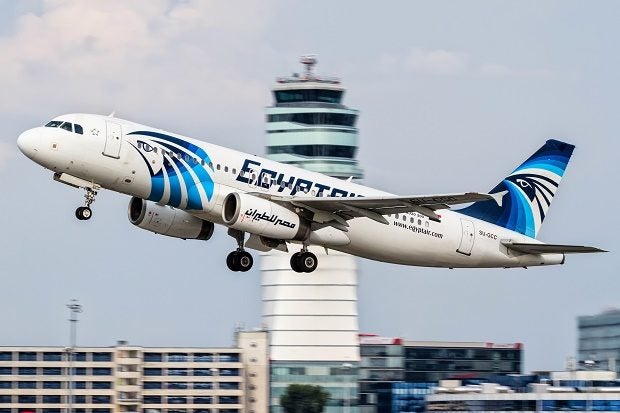 This August 21, 2015 photo shows an EgyptAir Airbus A320 with the registration SU-GCC taking off from Vienna International Airport, Austria. Egyptian aviation officials said on Thursday May 19, 2016 that an EgyptAir plane with the registration SU-GCC, traveling from Paris to Cairo with 66 passengers and crew on board has crashed off the Greek island of Karpathos.  AP

CAIRO — The cockpit voice recorder of the doomed EgyptAir plane that crashed last month killing all 66 people on board has been found and pulled out of the Mediterranean Sea, Egypt’s investigation committee said on Thursday.

The development raises hopes that investigators would find clues as to the cause of the May 19 crash, which remains unclear. No terror group has claimed responsibility for bringing the plane down.

The Egyptian committee said the so-called black box — one of the two on board the plane — has been damaged but that the vessel searching for the wreckage managed to safely recover the “memory unit, which is the most important in the recorder.”

The recorder was retrieved in “several stages,” the committee said, and is currently being transferred to the Egyptian port city of Alexandria. Once on shore, it will be handed over to the members of the committee who will unload and analyze the data.

The voice recorder should contain a record of the last 30 minutes in the cockpit, and is equipped to detect even loud breathing. Experts say that it takes nearly 48 hours to retrieve data from the recorder, unless it’s damaged.

Thursday’s announcement comes a day after the committee said the vessel John Lethbridge, which is operated by the Deep Ocean Search that was contracted by the Egyptian government to join the search for the plane debris and flight recorders, has spotted and obtained images from the wreckage of the EgyptAir plane.

The EgyptAir Airbus A320 was en route to Cairo from Paris when it crashed on May 19 between the Greek island of Crete and the Egyptian coast.

Leaked flight data indicated a sensor had detected smoke in a lavatory and a fault in two of the plane’s cockpit windows in the final moments of the flight.

After the crash, Egypt’s civil aviation minister Sherif Fathi said he believed terrorism was a more likely explanation than equipment failure or some other catastrophic event. But no hard evidence has emerged on the cause, and no militant group has claimed to have downed the jet.

Since the crash, ships and planes from Egypt, Greece, France, the United States and other nations have been searching the Mediterranean Sea north of Alexandria. Only small pieces of wreckage and human remains were eventually recovered in a search that was narrowed down to five-kilometer (three-mile) area of the Mediterranean.

Signals from the missing plane’s black boxes were first detected two weeks ago by the French ship Laplace, which joined the search and which is equipped with three detectors designed to pick up the locator pings emitted by flight data and cockpit voice recorders from deep underwater.

On Sunday, Egyptian investigators said time was running out in the search for the black boxes and that nearly two weeks remain before the batteries on them expire and they stop emitting signals.

Then the breakthrough came Wednesday, with Egypt saying that John Lethbridge had spotted and obtained images from the wreckage.

The crash shocked Egypt, coming less than a year after a Russian airliner was downed in Egypt’s Sinai Peninsula shortly after taking off from the Egyptian resort city of Sharm el-Sheikh in October, killing all 224 people on board.

A local affiliate of the Islamic State group claimed responsibility for bombing the aircraft and in November, Russia confirmed that an explosive device had brought down the aircraft.

The two disasters have unsettled authorities at the Cairo airport, where false alarms or bomb threats have caused lengthy delays to flights and at least one cancellation last week.

Security has also been considerably tightened at Egypt’s 20-plus airports since the Russian plane crash, with passengers now subjected to roughly the same security measures in force at major international airports.