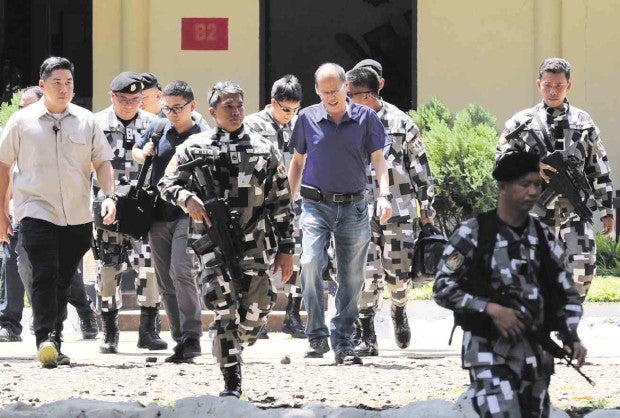 ZAMBOANGA CITY—A Norwegian man and a Filipino woman being held hostage by Abu Sayyaf bandits again pleaded for their lives and sought swift action from their respective governments on Wednesday as the notorious kidnap group warned of another execution should it fail to get its ransom demand of P600 million.

“We will upload a new video soon for our new ultimatum. No ransom, another beheading,” Abu Raami, the Abu Sayyaf spokesperson, told the Inquirer by phone.

The interview was cut short by Raami, who said helicopters and airplanes were flying over his location, indicating he was unaware that President Aquino was in Sulu province to meet with military officers leading the assault operations against the Abu Sayyaf. “We need to hide,” he said.

On Monday, the kidnappers beheaded Canadian hostage Robert Hall after the ransom money was not delivered to them. Another Canadian, John Ridsdel, met the same fate on April 25.

The two Canadians, along with Norwegian Kjartan Sekkingstad and Filipino Maritess Flor, were seized by armed men in an exclusive marina in Island Garden City of Samal in Davao del Norte province on Sept. 21 last year and were taken to the Abu Sayyaf stronghold in Sulu.

In Jolo, the President disclosed that he pondered placing the entire Sulu under martial law as part of the intensified operations against the Abu Sayyaf.

The possibility was discussed three weeks before the ransom deadline set by the kidnappers for Hall’s release, he said.

“Kidnapping is a very complex problem … I understand the difficulties (of running after the Abu Sayyaf),” he told reporters after presiding over a top-level meeting with the police and the military at Camp Teodulfo Bautista.

Sekkingstad said the Philippine and Norwegian governments must work faster to make sure he and Flor get out alive.

“All I can say is the demand has to be met; otherwise, we will be executed,” he told the Inquirer by phone on Wednesday morning.

But Sekkingstad said he did not know what the demand was.

The President said “private negotiators” had been communicating with the Abu Sayyaf for the Norwegian’s safe release even as he reiterated that the government would strictly observe its “no-ransom policy” in dealing with criminal groups.

“If we pay ransom, it would only worsen the problem and encourage others (to engage in kidnapping),” he said.

The President said he called Norwegian Prime Minister Erna Solberg on Tuesday night to brief her on the government’s efforts to secure Sekkingstad’s release.

The day before, he apologized to Canada’s Prime Minister Justine Trudeau for the deaths of the two Canadians.

Flor appealed for help to both incoming President Rodrigo Duterte and President Aquino.

“I have not lost hope on our new President,” she said in Filipino, even if she was told that Duterte has yet to assume his post on June 30.

On Monday, Raami said Hall’s beheading was meant to humiliate the tough-talking mayor of Davao City who had earlier vowed that “nothing of this nature will happen again” when he talked with Trudeau.

The Abu Sayyaf released a gruesome video of Hall’s death. It shows Hall in an orange shirt kneeling in front of a black Islamic State-style flag in a jungle area before he was killed.

Raami also has a message to outgoing President Aquino. “Do your job,” he said but did not elaborate.

In Ottawa, Hall’s family said on Tuesday that they agreed with Canada’s policy of not paying ransom for hostages and with Trudeau’s directive that money not be paid to hostage-takers who seek to undermine fundamental Canadian values.

“Our family, even in our darkest hour, agrees wholeheartedly with Canada’s policy of not paying ransom to those who would seek to undermine the fundamental values with which my father lived his life,” the family statement said.

“We stand with the ideals that built this country: strength of character; resilience of spirit; and refusal to succumb to the demands of the wretched, in order to satisfy the bloodlust of the weak.”

The family said that every option to free Hall was considered and efforts to that end were “vast and exhaustive.”

“He loved everything about the Philippines. The people, he said, are warm and gracious. He took an active interest in his community and his neighbors, and coached a local soccer team,” they said.  With a report from AP