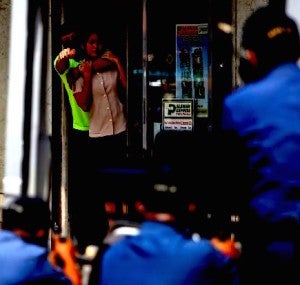 LAPU-LAPU CITY, Cebu — A pastor and her 13-year-old neighbor were released 40 minutes after they were taken hostage by her unemployed neighbor at Sitio Saac, Barangay Buaya, Lapu-Lapu City, past 1 p.m. Wednesday.

Glyn Punay, 35, surrendered after he was convinced by Barangay Buaya councilman Ricky Abing to release his neighbors, Mirasol Plaza, 39, and teenaged girl.

The hostage drama started at 1 p.m. when Punay broke into the house of Plaza and locked down her home before taking her and the girl hostage.

Plaza is a pastor of the Harvest Family Center under the Victory Church in Barangay Buaya.

SPO4 Jose Ruel Nalzaro of the Pusok police precinct, said they received a call from Plaza’s neighbor and he sent a Special Weapons and Tactics (SWAT) team to deal with the emergency.

Abing later arrived and managed to convince him to give up after only 20 minutes of negotiations.

Punay, a former landscaper and designer of a real estate company, said Plaza also helped convince him to surrender and release her and the girl. He said Plaza assured him that nobody would harm him if he surrendered.

Plaza then shouted to the police not to harm Punay as he was ready to surrender.

The hostage drama ended peacefully and all SWAT and police personnel who positioned themselves outside took Punay and brought him to the Pusok Police Station.

Punay, who reportedly confessed to being a drug user, claimed there were people that kept tailing him. He said he attended a relative’s wake and was unable to sleep a day before the hostage-taking.

He said he heard gunfire in the morning, which made him head to Plaza’s home in order to “seek advice.”

Although Plaza forgave Punay, Nalzaro said they would  file charges of public alarm and scandal against the suspect.  SFM