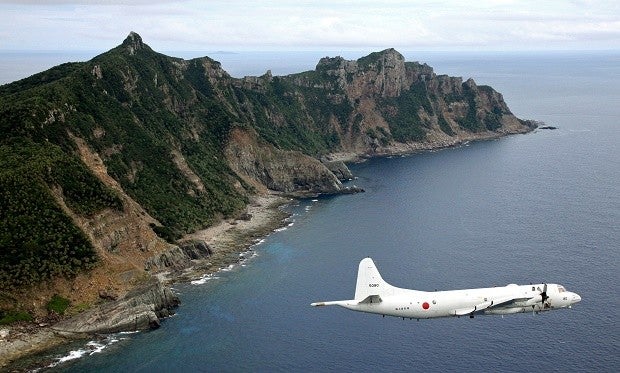 In this Oct. 13, 2011 file photo, Japan Maritime Self-Defense Force P-3C Orion surveillance plane flies over the disputed islands, called the Senkaku in Japan and Diaoyu in China, in the East China Sea. Japan protested to China on Thursday, June 9, 2016, after spotting a Chinese warship for the first time near disputed islands in the East China Sea. Japanese officials said a Chinese navy frigate was seen off the coast of the Japanese-controlled Senkaku islands, also claimed by China and called the Diaoyu islands. The ship did not violate Japan’s territorial waters, and it has since left the area. KYODO NEWS VIA AP FILE PHOTO

Seko said an official from the Foreign Ministry’s Asian and Oceanian Affairs Bureau expressed concern to an assistant ambassador of the Chinese Embassy in Tokyo about the Chinese naval activity. The incident comes after a Chinese naval ship sailed near the disputed Senkaku islands last week.