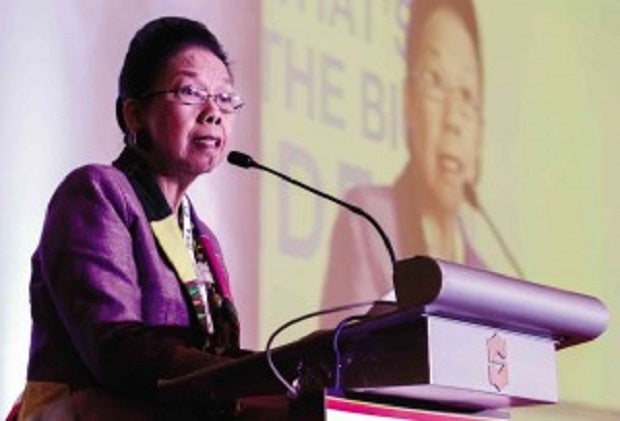 This, Taborra said, was despite the fact that incumbent Ched chair Patricia Licuanan’s term will not expire until 2018.

Standing by his blog account of the meeting at the so-called Malacañang of the South here last June 8, Tabora told INQUIRER.net that “personal exchanges” between Duterte and his longtime professor last Wednesday morning confirmed Lapuz’s designation.

“My blog shared with my readers the clear designation by President Duterte-elect of Prof. Jose David Lapuz as CHED Chair before a roomful of witnesses last June 8 at 2:30 a.m.  That designation was confirmed in personal exchanges that early morning between Prof. Lapuz and Pres.-elect Duterte,” Tabora wrote in an email.

The Jesuit priest said Duterte may ask Licuanan to give up her post based on the 2014 Commission on Audit report released just in January on unspent P1.2 billion fund for poor students, due to Ched’s “internal control weaknesses” in processing and releasing allowances under its student financial assistance programs (STUFAPS).

“Pres. Duterte will respect the law.  But the possibility remains that the President may ask her to resign based on, for example, the COA report on CHED under Licuanan. (Cf. COA Website) or the negative evaluations of the performance of CHED under Licuanan by the Office of Executive Secretary Ochoa. This will allow Pres. Duterte to place his political choice in CHED,” he said.

In 2014, Ched was allocated P5.2 billion to help 391,817 poor college students—nearly 10 times more than its usual number of beneficiaries—through scholarships, grants-in-aid and study-now, pay-later loans. But COA said P1.23 billion of the said amount went unspent because the Ched was not able to “absorb” its allocation.

In a statement in January, Licuanan said that as of December 15, 2015, the P1.2-billion budget “had been fully obligated with an assurance that the beneficiaries will be paid.”

Licuanan was appointed by President Benigno Aquino III in 2010 for a four-year term fixed under the law and was reappointed to a second four-year term, which expires in 2018.

Tabora said that Licuanan’s predecessor also quit from his post to give the then-new administration a free hand in selecting a new head for Ched.

“I understood that designation to be premised on either Patricia Licuanan submitting a courtesy resignation to the new President-elect, just as (former) Ched Chair Manny Angeles had submitted when Benigno Aquino became President, giving way for the chairmanship of Licuanan, or on Pres. Duterte asking Chair Licuanan to give way to his choice,” Tabora said.

“Chair Manny Angeles had two years of his term left when he resigned out of deference to the new President, as Dr. Licuanan has. I understand that meanwhile Dr. Patricia Licuanan has informed the President that she would like to continue her term as provided by law,” he added.

Asked about her possible replacement, Licuanan on Tuesday said: “Let it come from the President-elect himself.”

Incoming presidential spokesperson Salvador Panelo on Tuesday said no official announcement had been made yet when pressed about Lapuz’s reported designation.

He was also a board member and commissioner at the National Historical Society under the Arroyo administration.

INQUIRER.net sought Lapuz’s confirmation but he has yet to respond as of this article’s posting. IDL