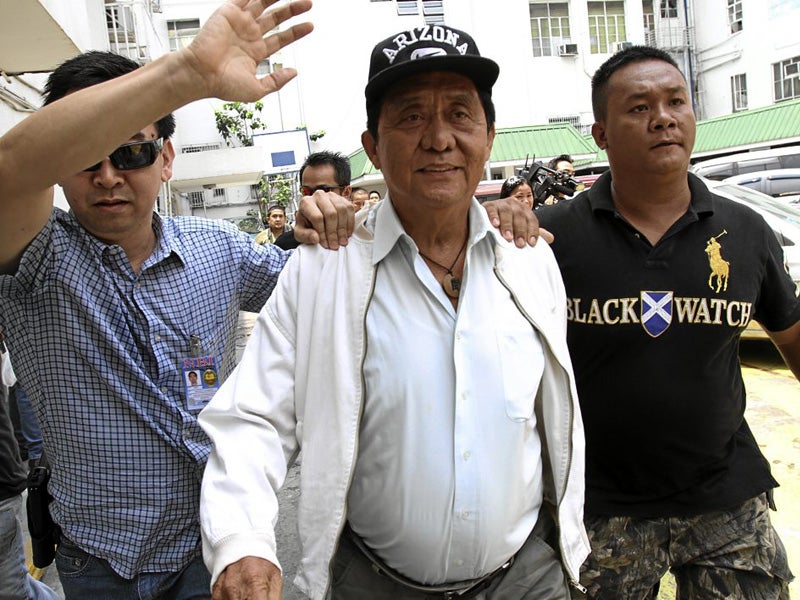 The Sandiganbayan on Wednesday deferred the malversation arraignment of former Batangas Gov. Jose Antonio “Tony” Leviste, who was convicted of homicide in 2009 but was released on parole after four years in prison.

During the hearing before the anti-graft court Fifth Division, Leviste’s lawyer Dennis Manalo said his client was running late and may have to miss the hearing.

Manalo said Leviste was just on his way from Lipa, Batangas.

Manalo asked the court to defer the arraignment pending the court’s resolution on Leviste’s motion to dismiss the case for lack of probable cause.

He asked the court to give Manalo a second chance after the justices found probable cause to hold Manalo on trial.

“We humbly and fervently move that the accused be given a second chance to present his case that the Ombudsman was not able to present probable cause,” Manalo said in open court.

Though Leviste has posted his bail bond, Manalo said the Sandiganbayan had allowed the accused to question the charge even after paying the bail bond.

Division chairman Associate Justice Roland Jurado approved the deferment of the arraignment, but reminded the lawyer to have his client present in the next hearing.

The court reset the arraignment on July 6.

Leviste, who was then chairman of the Board of Trustees of the Philippine Retirement Authority (PRA), and his accountant Philip John Moreno were charged with malversation for misappropriating or embezzling for their personal use and benefit public funds for which they were accountable for.

The Office of the Special Prosecutor said Leviste for his foreign travels from May to December 2003 was allotted with P869,180.75, of which he failed to liquidate  P151,385.42 in cash advance despite demands from the Commission on Audit and the PRA.

His foreign travels during the said period included trips to the United States, Japan, Taiwan, Hong Kong and China.

In his motion to dismiss, Leviste said the prosecution was not able to present proof he received the cash advance for his travel expenses, adding that some disbursement vouchers did not contain his signature that would indicate he had claimed the cash advance.

He said there was proof that he used his foreign travel funds for its intended purposes, adding that Leviste liquidated his expenses with the receipts.

“There is proof on record that accused Leviste used his alleged cash advances in accordance with the purpose for which they were disbursed, as per actual proof of expenses submitted by accused Leviste showing that he even had to spend more than the amount of said advances for his official missions abroad,” his motion read.

On May 30, the court issued a resolution finding probable cause against Leviste, but did not issue an arrest warrant after Leviste duly paid his bail bond.

In 2009, the Makati Regional Trial Court convicted Leviste of homicide for shooting dead his aide Rafael de las Alas in 2007.

The parole of Leviste, the former husband of Sen. Loren Legarda, was granted in 2013 by the Board of Pardons and Parole.

Just weeks after he was released, Leviste was accused of owning a game fowl farm in Lipa City which yielded P420-million worth of “shabu.” The former governor said he was only leasing the property. CDG