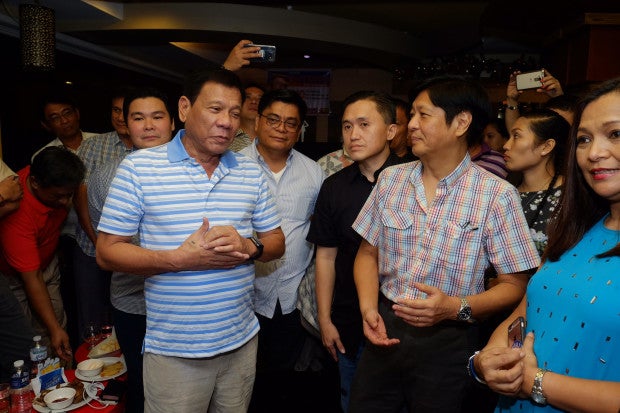 DEFEATED vice presidential candidate Sen. Ferdinand “Bongbong” Marcos Jr. is determined to push ahead with his election protest, his lawyer said, stressing that a possible post in President-elect Rodrigo Duterte’s government should not be viewed as a hindrance.

“As far as appointment is concerned, the question is whether that should be construed as abandonment of the protest. There is no jurisprudence on this,” Garcia said in a phone interview.

In the case of Sen. Miriam Defensor Santiago, the Supreme Court ruled that she had effectively given up her protest against Fidel Ramos when he won the presidency in 1992. The high court noted that Santiago subsequently ran and won an elective post rendering her earlier protest moot, Garcia said.

It remains unclear though whether the same principle would apply to Marcos’ case, Garcia said.

“If it’s an appointive post, that may not be abandonment [of the protest],” he said.

Garcia said it remained too soon to speculate on whether Marcos would serve in the Duterte cabinet. Marcos has earlier visited Duterte in Davao City and has hinted of joining the incoming administration as soon as the one-year ban on candidates expires.