Use of gadget teachers’ way to adjust to K-12 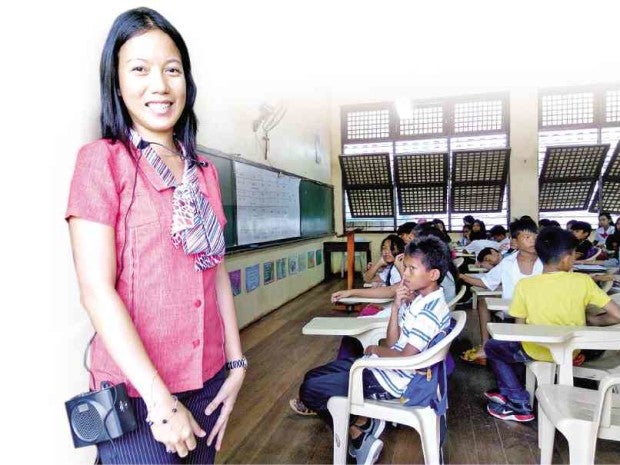 TAGBILARAN CITY—Rochelle Marie Bolotaolo, a high school teacher, uses a portable sound system to be heard by her students.

The sound system, a contraption with a microphone and a speaker the size of a notebook, is no fashion accessory for the teachers, though.

To Bolotaolo and at least six other Grade 7 teachers at Dr. Cecilio Putong National High School (DCPNHS), it’s one way to cope with one of the most visible effects of the K-12 program—oversized classes.

Bolotaolo, 33, said the sound system helped preserve her voice, eliminating the need for her to shout to be heard.

Without the gadget, Bolotaolo said it would be next to impossible for her students to hear her as the noise of ongoing construction of more classrooms in DCPNHS drowns out class lessons.

And with 50 students, Bolotaolo can’t expect to be heard clearly by everyone in her class.

Bolotaolo’s class can be considered oversized as the ideal class size is only 45 students for high school and 35 for elementary school.

It’s the effect of lack of classrooms and more students as a result of the K-12 program that adds more years to basic elementary and high school education to meet international standards.

At least seven of 150 teachers at DCPNHS had to use the gadget.

Another Grade 7 teacher, Jeanette Yenogacio, said she used the sound system to prevent too much strain on her vocal chords.

“I should preserve my voice because I still have six sections to handle,” Yenogacio said. The gadget, she said, helps her students, “even those seated at the back,” to hear her.

Bolotaolo and Yenogacio bought the gadgets using their own money. They, however, don’t mind dipping into their own pockets because they know it would be for the benefit of their students.

While education officials had said everything is set for the start of the school year and senior high school, perennial problems remain.

Class sizes had to be expanded and schools use one room for two or more classes, held by shifts, to cope with lack of classrooms.

DCPNHS, which has at least 5,000 students this school year, hold classes from 6 a.m. to noon and from noon to 6 p.m. to accommodate two classes per room.

Virgilia Omictin, DCPNHS principal, anticipated the school population to increase by 4 or 5 percent.

Grade 11, or senior high school, classes are to be held in morning and afternoon shifts.

In August, Omictin said two buildings with 16 classrooms would be finished and these could ease the shortage of rooms.

Lack of classrooms is also felt in public schools in Iloilo City, according to Victor de Gracia Jr., assistant director of the Department of Education in Western Visayas.

To cope, Gracia said, classes are being held in two shifts, a scheme carried out in previous school years to maximize the use of classrooms.

Enrollment in senior high school (Grade 11) in Western Visayas, though, is just a little more than half (57.6 percent) of the 64,548 students who had been expected to enter Grade 11.

Gracia said education officials believed that this was simply because of the practice of some parents to enroll their children at the last minute.

In Tacloban City, several public schools reported declines in enrollment but education officials attributed this to the transfer of residents to northern villages in the aftermath of Supertyphoon “Yolanda,” which slammed into the city in 2013.

One such school is San Fernando Central School.

Its principal, Delilah de los Santos, said families of 200 students were among those now living in the northern part of the city.

The northern villages had been identified by the city government as resettlement site for families displaced by Yolanda, which packed up to 300 kph winds when it made landfall in Tacloban.

In Negros Occidental, the opening of classes went smoothly on Monday although the number of enrollees was 3,000 lower than last year’s, according to Cynthia Demavivas, Bacolod schools superintendent.

Gladys Sales, Negros Occidental assistant schools superintendent, said there was a lack of classrooms for senior high school in some areas.

Parents and school officials have agreed to junior and senior high school students alternately using classrooms in some areas to cope with room shortage. With reports from Nestor P. Burgos Jr., Carla P. Gomez and Joey A. Gabieta, Inquirer Visayas