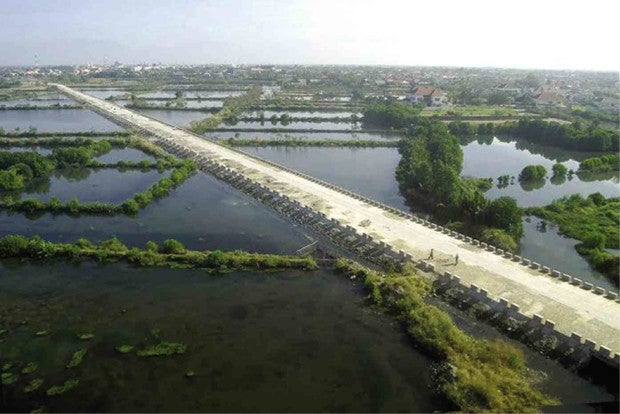 Tasty “bangus” (milkfish) made Dagupan City a brand name in the food industry. So it may be a bit ironic that its swamplands and fishing grounds are being converted into expanded business districts.

The city’s newly enacted Comprehensive Land Use Plan (CLUP) has delineated fishing areas as growth centers, a move that some councilors say could jeopardize the production of Dagupan bangus and worsen flooding in most villages.

Dagupan spans 44 square kilometers, 25 percent of which are covered by rivers and 25 percent by fishponds. Up to 8 percent lie along the coast that sink during high tide.

“Roughly, we have a 25 percent build-up area [in the swamp and fishing grounds] once reclaimed under the CLUP,” said Nicanor Melecio, a local environmentalist and a consultant of the city mayor’s office.

That means 11 sq km of fishing ground would soon become a residential and business district, complete with schools and hospitals.

The plan’s growth zones are located in portions of Barangay Bonuan and the Caranglaan-Tebeng and the Lucao-Pantal areas. These areas are traversed by the Pantal-Lucal diversion road and bridge project that crosses through fishponds which produce mostly bangus.

But Councilor Alipio Serafin Fernandez, who chairs the city council’s committees on land utilization and on laws and ordinances, wants the the CLUP to undergo further study and clarifications.

Stressing that he was not against the land use plan, Fernandez said the city government should first determine if the fishponds that would be converted into commercial zones had ceased to be economically viable to justify their new purpose.

“As you can see, the fishponds that would be converted into commercial areas are very productive and first class as they are [fed] by Pantal River,” he said. These are also considered environmental critical areas, he said.

“The proposed Pantal-Lucao to Bonuan growth centers … invites permanent disaster or damage to the city’s land use, [because these areas are] already characterized [as] large critical areas,” Fernandez said in a May 27 report to the council.

These areas are vulnerable to storm surges and floods and are water saturated and liquefaction-prone, he pointed out.

Liquefaction was a phenomenon observed and documented following the July 16, 1990, earthquake when saturated soil weakened to a degree that caused buildings to sink.

The cities and Dagupan and Baguio were studied by European experts to determine the impact of the quake on these heavily populated communities.

Fernandez said, “We do not need to be scientists to understand the fears [of residents] because even now, after it rains for days, [these new growth centers] would be under water. The situation is worsened during high tide even while the Pantal River [has undergone dredging operations] for the last three years.”

“Once the nature of these agricultural lands along De Venecia Highway changes, they will be filled [with soil], and that is when we [will] have created more problems and increased the disaster risk,” he said.

Melecio disagreed. “The city would never be free of flooding, whether there are growth centers [developed there] or not,” he said. “The growth centers would have flood control provisions and [investors] have to introduce the best available technology on flooding and storms.”

The legality of the CLUP ordinance has also been questioned. It was approved on second and third reading on June 7 by a select group of councilors who proceeded with the regular session that Vice Mayor Brian Lim had adjourned.

Lim said the ordinance was “null and void since it violates the Local Government Code (Republic Act No. 7160).”

“We are forced to take legal action against the illegal session,” he said in a text message.

According to the code, no two sessions, whether regular or special, could be held in single day.

But Councilor Jose Netu Tamayo, who voted for the ordinance, said legal officer Joseph Apolonio of the Department of the Interior and Local Government had given assurance of its legality so the councilors continued the June 7 session.

Councilor Red Erfe-Mejia, who is supporting the call for a CLUP review, said Mayor Fernandez owns lands in the growth centers and would be their immediate beneficiary.

In a June 9 news conference, the mayor said it was not her family’s fault that it invested in properties now being converted into industrial zones under the CLUP. She said her family did not know these areas would be part of growth areas at the time the properties were bought.