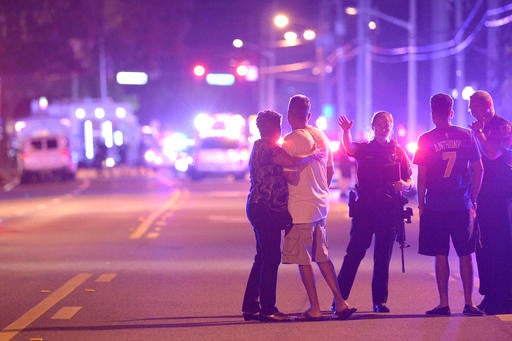 Orlando Police officers direct family members away from a multiple shooting at a nightclub in Orlando, Fla., Sunday, June 12, 2016. A gunman opened fire at a nightclub in central Florida, and multiple people have been wounded, police said Sunday. (AP Photo/Phelan M. Ebenhack)

ORLANDO, Florida — A gunman wielding an assault-type rifle and a handgun took hostages and opened fire inside a crowded Florida nightclub, killing approximately 20 people and wounding 42 others before dying in a gunfight with SWAT officers, police said Sunday.

Police Chief John Mina also said the shooter had some sort of “suspicious device.” He said the suspect exchanged gunfire with an officer working at the club around 2 a.m., then went back inside and took hostages.

Around 5 a.m., authorities sent in a SWAT team to rescue the hostages, and the suspect then died in a gunfight with those officers. Mina said police have not determined an exact number of casualties, but that “approximately 20” people were dead inside the club.

FBI spokesman Danny Banks said during a news conference that the mass shooting is being investigated as an act of terrorism. He says authorities are looking into whether this was an act of domestic or international terror, and if the shooter was a lone wolf.

Police had said previously on Twitter that there was a “controlled explosion” at the scene of the shooting at Pulse Orlando. Mina said that noise was caused by a device intended to distract the shooter.

Mina Justice was outside the club early Sunday trying to contact her 30-year-old son Eddie, who texted her when the shooting happened and asked her to call police. He told her he ran into a bathroom with other club patrons to hide. He then texted her: “He’s coming.”

“The next text said: ‘He has us, and he’s in here with us,'” she said. “That was the last conversation.”

Dozens of police vehicles, including a SWAT team, swarmed the area around the club. At least two police pickup trucks were seen taking what appeared to be shooting victims to the Orlando Regional Medical Center.

Pulse Orlando posted on its own Facebook page around 2 a.m.: “Everyone get out of pulse and keep running.” Just before 6 a.m., the club posted an update: “As soon as we have any information we will update everyone. Please keep everyone in your prayers as we work through this tragic event. Thank you for your thoughts and love.”

The incident follows the fatal shooting late Friday of 22-year-old singer Christina Grimmie, who was killed after her concert in Orlando by a 27-year-old Florida man who later killed himself. Grimmie was a YouTube sensation and former contestant on “The Voice.”

Jon Alamo said he was at the back of one of the club’s rooms when a man holding a weapon came into the front of the room.

“Everybody was drinking their last sip,” he said.

He estimated more than 100 people were still inside when he heard shots, got on the ground and crawled toward a DJ booth. A bouncer knocked down a partition between the club area and an area in the back where only workers are allowed. People inside were able to then escape through the back of the club.

Christopher Hansen said he was in the VIP lounge when he started hearing gunshots. He continued to hear shooting even after he emerged, where police were telling people to back away from the club. He saw injured people being tended to across the street.

“I was thinking, are you kidding me? So I just dropped down. I just said please, please, please, I want to make it out,” he said. “And when I did, I saw people shot. I saw blood. You hope and pray you don’t get shot.”

Read Next
Full text of Aquino’s final address to the nation
EDITORS' PICK
PH preps for China virus: Question of when, not if
Beyond water service: Maynilad builds massive infrastructure projects to clean up Metro Manila waterways
Museums ‘put to sleep,’ churches closed amid volcano’s unrest
Seventh judge assigned to handle De Lima case
SM continues to send relief assistance to remote towns in Batangas
Get exciting deals and discounts when you download the new McDonald’s App
MOST READ
Taal Volcano flexes signs of restiveness anew
Part of Aurora Boulevard in Cubao closed from Jan. 25 – Feb. 1
Passengers from Wuhan, China to be flown out of Kalibo, Aklan – CAAP
Lacson on Duterte’s threat to end VFA over Bato’s canceled visa: Where is the connection?
Don't miss out on the latest news and information.