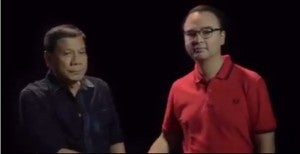 President-elect Rodrigo Duterte and Sen. Alan Peter Cayetano appear in a campaign advertisement before Duterte’s historic election as the country’s President on May 9, 2016.  SCREENGRAB from Cayetano’s Facebook page

DAVAO CITY – Senator Alan Peter Cayetano is sticking to his original stand against the burial of former President Marcos at the Libingan ng mga Bayani, contrary to the decision of President-elect Rodrigo Duterte.

Cayetano was Duterte’s running mate in the recent elections. “I’ve already answered that during the campaign,” Cayetano told reporters in Davao City on Sunday.

“That is something that we don’t see eye to eye with the President(-elect),” he said of Rodrigo Duterte, who would take his oath as President on June 30, 2016.

Cayetano also said his stand against ill-gotten wealth not only by the Marcoses but also other officials who stole from the country’s coffers has always been the same and would stay the same. 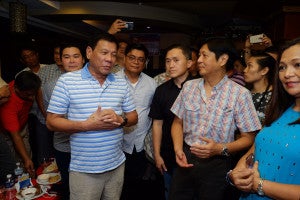 “Any stolen money from the Philippines should be recovered, the anti-graft laws shall be strengthened,” he said.

“But as I said, let’s not make this an Aquino versus Marcos thing,” he said, referring to the historical rift between the families of outgoing President Benigno Aquino III and Senator Ferdinand “Bongbong” Marcos Jr., which started with the political rivalry between Senator Benigno Aquino Jr. and dictator President Ferdinand Marcos Sr. in the 1970s.

“Many people stole money from the Philippines, let us run after all of them),” Cayetano added.

He, however, refused to comment on the reports that Duterte has decided to set aside an appointive post for Senator Marcos after the lapse of the one year ban on the appointment of candidates who did not get elected last May.

“It’s the decision of the appointive authority. It’s the President’s discretion,” he said.  SFM