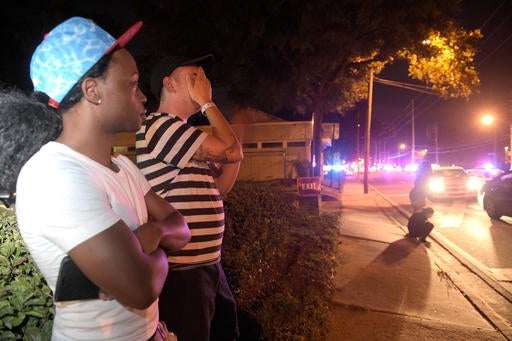 Jermaine Towns, left, and Brandon Shuford wait down the street from a multiple shooting at a nightclub in Orlando, Fla., Sunday, June 12, 2016. Towns said his brother was in the club at the time. A gunman opened fire at a nightclub in central Florida, and multiple people have been wounded, police said Sunday. (AP Photo/Phelan M. Ebenhack)

MIAMI, United States — An unknown number of people have been injured in an ongoing shooting attack at a gay nightclub in Florida which began early on Sunday, with police reporting “multiple injuries.”

The incident began at around 2:00 am at the Pulse nightclub in downtown Orlando, with witnesses speaking of a gunman opening fire with an automatic weapon.

The shooter behind the attack is dead, police said, describing the scene as a “mass casualty situation.”

“We can confirm this is a mass casualty situation,” the Orlando police said on their Twitter account.

“The shooter inside the club is dead,” they said in a separate tweet.

It was the second shooting incident in the city in just over 24 hours, coming shortly after singer Christina Grimmie was shot dead late Friday by a gunman who stormed a theater where she had just finished a gig.

“Shooting at Pulse Nightclub on S Orange. Multiple injuries. Stay away from area,” Orlando police wrote on Twitter, with a police dispatcher telling AFP it was an “active shooting.”

“There are injuries. I am not sure if there are any deceased at this time,” the dispatcher said.

“Officers are going in to search the building and to get people out.”

The club advertises itself online as “Orlando’s hottest gay bar.”

Speaking to Sky News, clubber Ricardo Negron, who was inside when the shooting began, described how the gunman raked the club with bullets.

“At around 2:00 am someone started shooting. People just dropped on the floor. I guess the shooter was shooting at the ceiling because you could see all the glass from the lamps falling,” he told the network.

He described hearing “non-stop firing” which probably lasted less than a minute but felt like a lot longer.

“There was a brief pause in the shooting and some of us just got up and ran out the back.”

“People have definitely been injured — or worse.”

It was not immediately clear how many people were inside the club when the shooting began.

“I didn’t see any of the actual shooters. I just saw bodies going down,” he told CNN, saying he was ordering a drink at the bar at the time.

“I fell down. I crawled out. People were trying to escape out the back. I just know that when I hit the ground, I was crawling and I hit my elbows and my knees. When I got across the street, there were people — blood everywhere,” he said.

The incident came just two days after a deadly shooting at the nearby Plaza Live Theater in which a heavily-armed gunman shot and critically wounded singer Christina Grimmie, a former contestant on the popular TV talent show “The Voice.”

She was rushed to hospital but died of her wounds.

The theater is located less than four miles away from Pulse nightclub.

The gunman, 27-year-old Kevin James Loibl, then killed himself.

He was found to be armed with armed with two handguns, ammunition and a hunting knife, police said. His motive remains unknown.