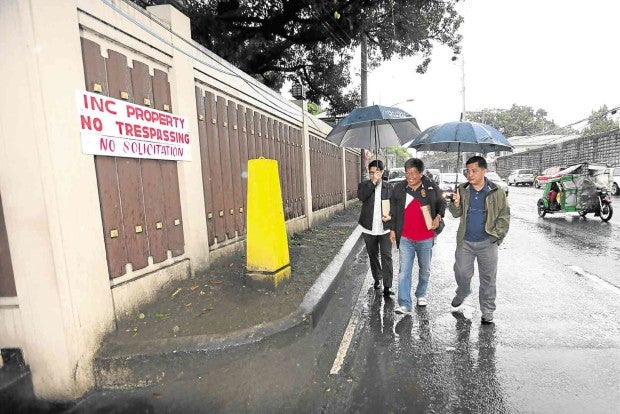 Guards posted by the Iglesia ni Cristo are barring the delivery of food and water to a disputed property in Quezon City, where the expelled siblings of INC executive minister Eduardo Manalo remain holed up almost a year after a leadership crisis rocked the influential religious group.

This was according to lawyer Trixie Cruz Angeles, who said the property’s occupants—led by her clients, siblings Angel Manalo and Lottie Manalo-Hemedez—were being deprived of supplies since Thursday at No. 36, Tandang Sora Avenue.

Told of the lawyer’s complaint, INC spokesperson Edwil Zabala issued a statement saying the church was just exercising its right as the legitimate owner of the property. He also cited “the unauthorized presence of unknown armed men” inside it.

The Tandang Sora address has served as the home of the church’s founding family since the 1970s, but the internal feud that went public in July 2015 has since led to a legal battle between Hemedez and the INC over the property’s ownership.

The INC then asked a Quezon City court to bar visitors to the property, citing security reasons, while Hemedez filed a complaint saying a 2015 document bearing her signature and affirming the sale of the property to INC was falsified. The city prosecutor’s office on May 6 dismissed  Hemedez’s complaint for lack of evidence.

In a phone interview on Saturday, Angeles confirmed reports that since Thursday, food and water deliveries were being “rejected” by INC-posted guards at the compound.

On Friday, the lawyer said, the guards first stopped a food delivery in the morning but allowed a water delivery in the early afternoon when a representative of the Commission on Human Rights (CHR) arrived. But later that same afternoon, they blocked Angeles’s staff when they tried to bring in more water.

“They said we can only (deliver) during office hours, which is strange because we used to be able to make deliveries up to 9 p.m. There are no ‘office hours’ when someone needs food and water,” Angeles told the Inquirer.

One of the guards told her staff that they needed to ask permission first from the INC legal office, she added.

The guards also claimed that the order to restrict to deliveries came from public officials, she said. “They would mention different officials, from the mayor to the barangay, then even (incoming President Rodrigo) Duterte. That was yesterday. My staff heard that and we’ll take appropriate action on that. I seriously doubt that the incoming President would have said something like that.”

In text messages to the media, Zabala, the Iglesia spokesperson, said the INC was just exercising its right as the legitimate property owner with legitimate security concerns.

Zabala maintained that “Angel Manalo and Lottie Hemedez currently occupy a house inside a compound in 36 Tandang Sora, that is the property of our Church.”

He said the INC was “gravely concerned” about the presence of unknown armed men in the property “without the consent of the Church.”

“As custodians of the Iglesia ni Cristo, our officials have both the legal authority and moral responsibility to ensure that its properties are used properly and in accordance with the teachings of the Church, and not for illegal activities,” he said.

“We wish to emphasize that we will continue to exercise our rights as the legitimate owner. It bears stressing that the unauthorized presence of unknown armed men at the said property, located in such close proximity to the central office—where Church officials work and where our executive minister, Ka Eduardo V. Manalo currently resides—is a legitimate security concern for us, just as it would be for any property owner similarly situated.”

“The INC will continue to exercise restraint with those who have publicly shamed us and sown intrigue against the Church. We, however, ask them again earnestly to end their attacks so that our membership can worship in peace, and our leadership can quietly focus on the services and programs of the Church.”