PNP: We have enough evidence to pin down Marcelino 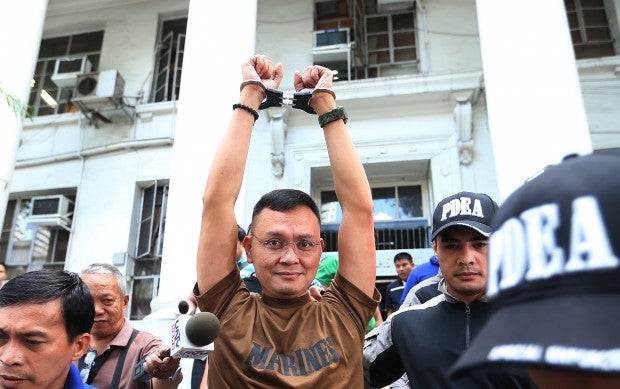 Lt. Col. Ferdinand Marcelino raises his hands as he leaves DOJ building after attending the preliminary hearing at the office of Senior Deputy State Prosecutor Theodore Villanueva at the Department of Justice in Manila. EDWIN BACASMAS/Philippine Daily Inquirer File Photo

The Philippine National Police said on Friday it had enough evidence to pin down Lt. Col. Ferdinand Marcelino, even as it stressed it respected his recent pronouncements that he was not involved in illegal drugs.

The police Anti-Illegal Drugs Group (AIDG) said it was confident the public would not be swayed by the disgraced military official’s claims of innocence after he charged that it was his arresting officers who were instead involved in the trade.

“The evidence is the basis. We firmly believe that our case against him is strong. Whatever he says, you will hear nothing from us. Let the courts, the Department of Justice (DOJ) decide,” Supt. Enrico Rigor of the AIDG’s legal division said.

The decorated Marine officer walked out of jail early this month after he posted a P1 million peso bail for his provisional liberty. He was arrested along with a Chinese national during a raid at an apartment in Sta. Cruz by joint AIDG and Philippine Drug Enforcement Agency (PDEA) operatives in January.

He has claimed innocence and promptly sought to turn the tables on his captors, saying he was on a legitimate operation. However he was unable to present documents backing his claim.

They were both charged with manufacturing and conspiring to manufacture illegal drugs and for violating the election gun ban before the DOJ, which has yet to issue a resolution.

He made the statement in reaction to Marcelino’s allegations that it was the arresting operatives of the AIDG and the PDEA  who were involved in illegal drugs.

Rigor said it was within the Marine colonel’s rights to air his side in whatever venue, but stressed that granting Marcelino bail did not affect the merits of the case.

The court, in allowing Marcelino provisional liberty, however, ruled that the strength of the evidence against him was weak, but not for his Chinese companion.

“It’s sad why he chooses to air his defense through the media. During the petition for bail, they chose not to present any defense. They should have done it there, so that it is on record,” Rigor said.

He pointed out that Marcelino’s lawyers waived their client’s right to present defense evidence during the hearing for the petition for bail.

The AIDG maintained that the charges will be resolved based on the evidence, which may include Marcelino’s confiscated mobile phone.