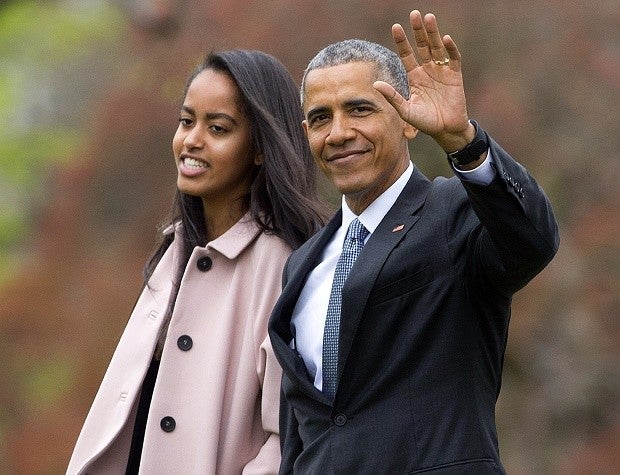 In this April 7, 2016 file photo, President Barack Obama and his daughter Malia, walk across the South Lawn of the White House in Washington before boarding Marine One helicopter for the short flight to Andrews Air Force Base. A milestone has arrived for Obama: Daughter Malia is graduating from high school. The 17-year-old is receiving her diploma from the private Sidwell Friends School on Friday, June 10, 2016. AP File Photo

WASHINGTON, United States—President Barack Obama made the short but sentimental drive across Washington on Friday to attend his oldest daughter’s high school graduation.

Obama has joked that Malia’s graduation was the one event where he could not give an address.

“Malia’s school asked if I wanted to speak at commencement and I said no,” Obama said in Detroit earlier this year.

True to his promise, Obama was photographed by guests at Sidwell Friends School wearing dark glasses.

He was accompanied by First Lady Michelle Obama, Malia and his youngest daughter Sasha.

She is expected to attend Harvard in 2017, after a gap year.

Obama earlier this year told television host Ellen DeGeneres of his sorrow at thinking that she would soon fly the nest.

He said he would be “sobbing” at the graduation.

“She’s one of my best friends. And it’s going to be hard for me not to have her around all the time. But she’s ready to go. You can tell. She’s just a really smart, capable person and she’s ready to make her own way.”