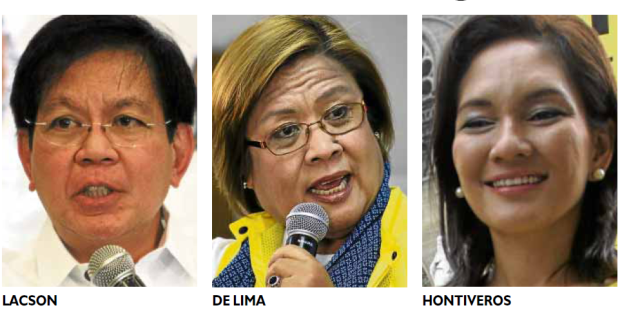 The senate will investigate government abuses and nobody, not even the President, can stop it from doing its job, three incoming senators said on Friday.

Through separate text messages to the Inquirer, Senators-elect Panfilo Lacson, Leila de Lima and Risa Hontiveros took an uncompromising stand after President-elect Rodrigo Duterte warned lawmakers not to stand in the way of his merciless fight against crime.

Speaking to supporters in Cebu City who were celebrating his electoral victory on Wednesday, Duterte said that on Tuesday night he told some congressmen, including incoming House Speaker Pantaleon Alvarez, not to make the mistake of conducting congressional inquiries into his anticrime campaign.

“Don’t investigate me. The road ends with me. The buck stops here. We’re going to have a fight,” Duterte said. “I’m going to do what is right, as long as it is the truth.”

Duterte was pushing the tough guy image, fortified with profanity-laced language, that he used to win votes during the campaign, but yesterday’s response from Lacson, De Lima and Hontiveros indicated that he failed to chill spines in the Senate.

Lacson, who is expected to head the committee on public order and dangerous drugs, said the Senate was not like a provincial, city, or municipal council that could be controlled by local executives.

READ: Duterte’s war on drugs could bring back ‘wild West’–Lacson

“Having said that, we will conduct investigations in aid of legislation whenever necessary, and nobody, not even the President of the Republic, can dictate and stop us from doing our job,” Lacson said in his text message.

“The President should not and cannot stand in the way of our mandated duty,” he added.

The Senate will use its powers when necessary, including the power to issue subpoenas and cite people who defy its authority for contempt, he said.

Lacson stressed the importance of respect for others.

“In a civilized society, respect deserves respect. On the other hand, unmannerliness deserves some rudeness,” he said.

READ: Lacson: Nobody, not even Duterte, can dictate Senate’s duty

In her text message, De Lima said that if Duterte had not been misquoted, then his statements showed that people could expect from his administration “intolerance to any form or measure of checks to possible abuses.”

“The concept of checks and balances is seemingly lost on the President-elect,” said De Lima, who is expected to head the committee on justice and human rights.

Duterte’s statements were intended to have a “chilling effect [on] Congress,” she said.

But she said she believed lawmakers would not take his warnings sitting down and would investigate government abuses and “continue to fulfill their mandate as the people’s last guarantee against a possible tyranny of the executive branch.”

De Lima said, however, that she was a firm advocate of the fight against crime and corruption, and would not be a hindrance to any legitimate anticrime operation.

“I don’t think any of us who will be sitting in the Senate and the House will unnecessarily hamper law enforcement just for the sake of conducting investigations,” she added.

But if the war against crime tramples on human rights and disregards the rule of law, the senators will not be blind, she said.

“When this so-called all-out war against crime is conducted without regard for the rule of law and human rights, then I think it would be an abdication of our mandate if we keep our eyes closed to abuses in the name of fighting criminality,” she said.

“We were not elected by the people to be a rubber-stamp Congress,” she added.

READ: De Lima urges Duterte: No other time to act presidential but now

In her text message, Hontiveros said Senate investigations should not be seen as a hindrance to efforts to stamp out crime and corruption.

“Congressional inquiries could improve an anticrime campaign, as well as prevent or correct any possible excesses in its prosecution,” Hontiveros said.

But the separate, coequal branches of government must respect each other in carrying out their mandates, she said.

There has been no reaction from the House of Representatives since Tuesday.

Members of the chamber have been traveling to Davao in recent days to pledge allegiance to Duterte, seen as necessary to securing the leadership of major House committees.

Duterte, a longtime mayor of Davao City who has been linked to so-called death squads that have killed more than 1,000 suspected criminals in his municipality, was elected on an anticrime platform that included mass killings of lawbreakers.

During the campaign, he promised to kill tens of thousands of suspected criminals and after his election on May 9, he announced bounties in the millions of pesos for drug bosses.

He urged the public to help him fight criminals, offering medals to armed civilians who would kill drug dealers in their neighborhoods.

Duterte also vowed to restore the death penalty, with hanging as the preferred method of execution. TVJ