De Lima urges Duterte: No other time to act presidential but now 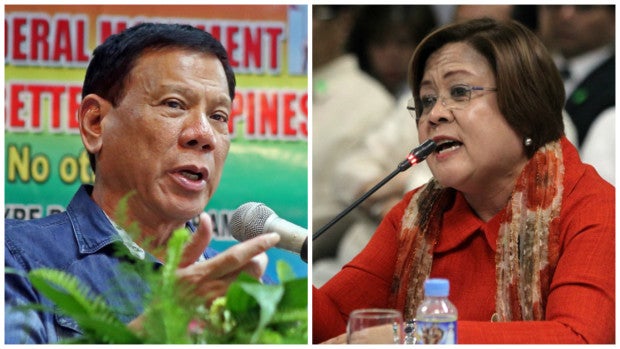 There is no other time but now.

Senator-elect Leila de Lima, who had earlier vowed to become a fiscalizer in the incoming administration, urged President-elect Rodrigo Duterte to act presidential, not only for his own benefit, but for the Filipino people.

“The time to act presidential is now, and he should realize this not only for his own good, but for the good of the millions of Filipinos who only wish him well and want to see him succeed,” De Lima said in a statement on Friday.

De Lima called out the trash-talking former Davao City Mayor for attacking several institutions and sectors in the society in his recent press conferences while in his hometown.

“The recent statements of the President-elect on the church, media killings, sexual harassment, and the UN (United Nations), with matching outlandish behavior during his press cons, are all vintage Duterte,” she said.

“President-elect Duterte must not be so intolerant to all criticisms as to fail to recognize the folly of attacking women, the catholic church, the media, and now the international community of nations under the UN,” she added.

And considering that the foul-mouthed mayor had displayed this brashness from the beginning of the campaign, De Lima said Duterte’s promise of a “metamorphosis” when he assumes the presidency is still questionable.

“Sadly, the fact that he is now President-elect does not mean he will change his worldview or attitude,” she said.

Moments after Duterte went on a cursing spree as he denounced the media, the Catholic Church, and the UN on Thursday night, he told reporters there that he was merely enjoying his time as rude person. He said he would metamorphose into a statesmanlike leader once he formally assumes the highest position in the land.

“We always knew that he was never a great fan of human rights, women’s rights, or press freedom. He never pretended to be a champion of democracy, a free press, or political pluralism. After all, he did run on a platform of vigilante justice, suppressing political opposition, and human rights. We can only expect to hear more of these outrageous statements from him,” De Lima said.

De Lima, a former Justice Secretary and Human Rights commissioner, said that until Duterte has not shown any change in how he deals with different issues, the public should continue to press his government to uphold human rights and press freedom.

“So until he does change, we just have to do our part in opposing his positions against human rights and the freedom of the press, especially whenever they are manifested in reality or are carried out as government policy and action,” she said.

“Yet, despite all [of] this, we still hope though that he finally realizes the respect owed to the office he now holds, and live up to the dignity and honor expected from the one who holds it,” De Lima added. IDL