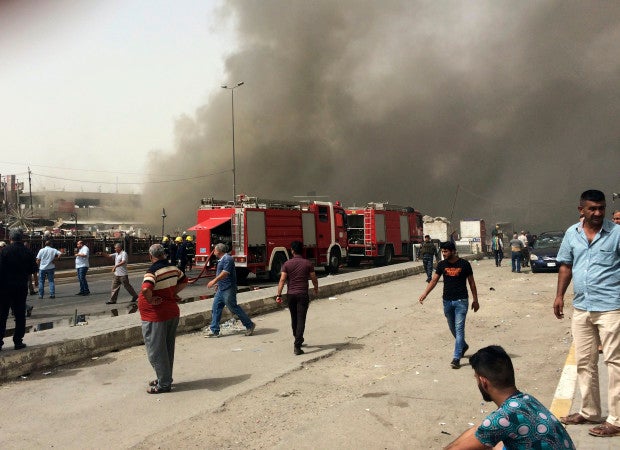 Smoke rises as Iraqi security forces and civilians gather at the scene of a deadly suicide car bomb attack in the Shiite-dominated neighborhood of New Baghdad, Iraq, on June 9. A police officer says Thursday’s explosion killed more than a dozen and wounded up to 35 civilians. He added that the explosives-laded car was parked in a crowded area and that causality figures could be higher. AP

BAGHDAD—Iraqi officials say a suicide bomber has rammed his explosives-laden car into an Iraqi army checkpoint north of Baghdad, killing at least 12 people.

The police officer says Thursday’s attack in the town of Taji, about 20 kilometers north of Baghdad, killed seven civilians and five troops. He says at least 28 people were wounded.

The attack coincides with another suicide car bombing in a commercial area in the capital’s Shiite-dominated neighborhood of New Baghdad, which killed at least 15 civilians and wounded 35 others, according to officials. The Islamic State group claimed responsibility for the Baghdad attack in an online statement.

Medical officials confirmed the casualty figures. All officials spoke on condition of anonymity as they were not authorized to brief the press.