Floirendo: I gave P75M to Duterte campaign out of brotherly love 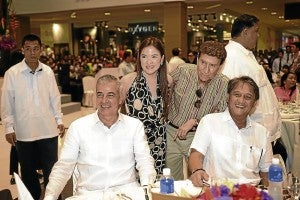 “Beyond the millions of pesos, it was my brotherly love to President-elect Rodrigo Duterte that prompted me to support his candidacy,” Floirendo said in a statement.

“This was also the reason why I had to back out of my support for VP (Vice President) Jejomar Binay which the good outgoing vice president understood well,” he added.  Binay ran for president and ended in fourth place.

Floirendo, who was in Paris as of Thursday, said he would have wanted his contributions to Duterte’s candidacy “be incognito but because the law mandates it to be made public for transparency purposes, I submit to the mandate of the law.”

“But I would like to express that all of the millions I have donated to Duterte are without any strings attached, so to speak,” he said, adding that it was his “humble contribution, first, as a ‘brother’ and an ardent supporter.”

“Second, as a fellow Mindanaoan who saw in President Rody the man who could make it all happen for Mindanao,” he added.

“I believe he will do what he promises. I believe in him. He is a no-nonsense person,” he said.  SFM/rga