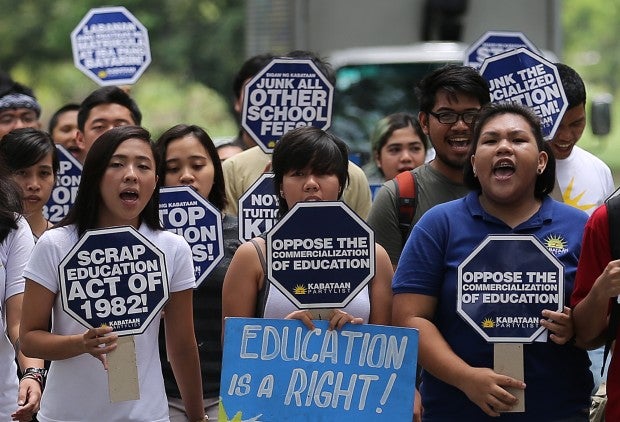 Militant students rally outside the Commission on Higher Education in UP Diliman, Quezon City in protest against the increase of tuition and school fees for the coming school year. They are asking presumptive president elect Rodrigo Duterte to stand for free education. INQUIRER PHOTO/RAFFY LERMA

The Commission on Higher Education (CHEd) on Thursday said that it has approved the applications of 304 private universities and colleges to raise their tuition and other school fees for the academic year 2016 to 2017.

The average tuition hike is pegged at P43.39 per unit while other school fees were allowed to increase up to 5.41 percent or P115.58.

These figures were lower compared to what the higher education body approved last year. In 2015, CHEd approved the applications of 313 universities and colleges. The average tuition hike then was pegged at P29.86 per unit while for other school fees, the increase was at 6.55 percent or P135.60.

Last year, CHEd approved the applications of 313 universities and colleges for fee hikes.

Youth groups slammed the decision of CHEd to approve another round of tuition and other school fee increases in private higher education institutions.

In a statement, League of Filipino Students (LFS) secretary general Aries Gupit said: “With this new set of increase in tuition and other fees, CHEd exposed itself again as an institution that caters to the interests of profit-seeking capitalist-educators while betraying the youth’s right to education.”

“It will only deepen the financial woes of many students and their families … This new wave of tuition increases will undoubtedly force more students to stop schooling due to financial constraints,” incoming Kabataan Partylist Rep. Sarah Elago said. RAM/rga