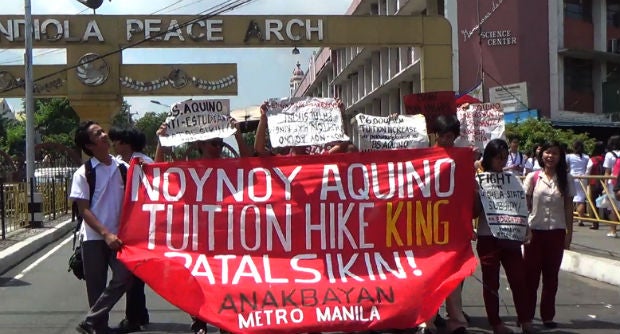 Students from 313 private colleges and universities nationwide may expect to pay more come enrollment time, as the Commission on Higher Education (CHEd) has approved the request of these higher education institutions (HEIs) for an increase in tuition and other school fees.

In a statement released on Tuesday, CHEd Chair Patricia Licuanan said the commission had approved an average tuition increase of P29.86 per unit, while the average increase allowed for other school fees was P135.60.

The CHEd, however, did not release the list of the 313 schools increasing their fees this school year. A total of 405 HEIs applied for an increase, the commission added.

For the National Capital Region, the CHEd approved an average tuition increase of P32.34. The average increase in Central Luzon was P35.60, and P37.36 in Calabarzon.

Licuanan said no increase was approved in Eastern Visayas, which suffered the worst brunt of Supertyphoon “Yolanda” (international name: Haiyan) in 2013, though four of 81 educational institutions in the region applied for an increase.

The CHEd chair said the commission considered several factors before approving the increase, among them the effects of the regional inflation rate, the school’s financial standing, and the students’ financial capacity.

Data from the Philippine Statistics Authority showed that the inflation rate ranges from a low of 3.16 percent in Calabarzon to a high of 6.25 percent in Central Luzon. The National Capital Region has an inflation rate of 4.37 percent.

The CHEd also considered the commission’s Memorandum Order No. 3, or the “Enhanced Policies, Guidelines and Procedures Governing Increases in Tuition and Other School Fees, Introduction of New Fees, and for Other Purposes.”

According to this memo, 70 percent of the total proceeds from the fee increase should go to faculty development and should cover the benefits of teaching and nonteaching personnel, as well as increases provided for in their collective bargaining agreement. The other 20 percent should go to the improvement of the school’s facilities, while only 10 percent should be set aside as the institution’s profit.

“The CHEd’s approach to the issue of tuition is wholistic,” Licuanan said in her statement.

“In the light of contending concerns and interests in society, there is need to balance access issues with sustainability of educational institutions. For its part, the CHEd ensures that HEIs meet the guidelines provided by law, especially the requirement of consultation, the allocation of tuition, and strict adherence with the processes that seek to make tuition and other school fee increases transparent, reasonable and affordable,” she added.

To help address the issue of access to higher education, Licuanan said the commission had allocated more than P1.5 billion for 123,882 slots under its student financial assistance program, “triple” the slots allotted last year.

Students under this program are also beneficiaries of the social welfare department’s Pantawid Pamilyang Pilipino Program.

The tuition increase was expectedly met with protests from militant student groups.

Anakbayan national chair Vencer Crisostomo said the increase in tuition and other school fees would push up the country’s college dropout rate.

“Only 20 percent of those who enter college are able to graduate,” Crisostomo told the Inquirer in a phone interview. “This new round of increases would only burden the parents (further),” he said, adding that the increase could not be deemed “reasonable,” as the “salaries of parents (have not) been increasing at all.”