‘VP not immune from suits, probes’ 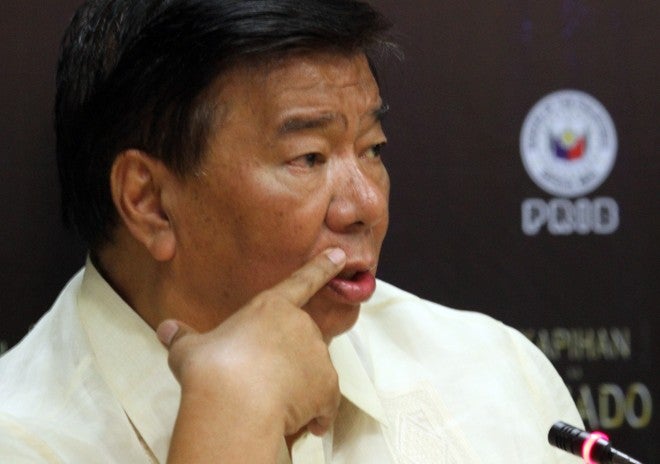 “No one is above the law,” Senate President Franklin Drilon said on Tuesday, referring to Vice President Jejomar Binay who is facing possible corruption charges for the alleged overprice in the construction of a Makati parking building.

“Whether you are rich or poor, powerful or an ordinary person, if you are liable under the law, you have to face it,” Drilon said in a radio interview, adding that he disagreed with the position of lawyer and University of the Philippines law professor Harry Roque who had said Binay was immune from suit because the Vice President was an impeachable official.

The Senate President said such a position was difficult to accept as the country was a democracy where everyone was equal under the law.

Neither is Binay immune from investigations, according to Sen. Francis Escudero, including that of the Anti-Money Laundering Council (AMLC), which recently filed a petition to freeze the Vice President’s assets.

It’s not a suit

Escudero, himself a lawyer, disputed Roque’s contention that the AMLC petition to freeze Binay’s assets violated the Vice President’s immunity from suit, and that it was only a matter of time before the Supreme Court declared the freeze “unconstitutional.”

The senator said the AMLC’s petition and the Court of Appeals’ freeze order were only part of the council’s investigation and could not be considered a case or suit against the Vice President.

When the freeze order expires in six months, the AMLC may or may not file a case against Binay and his associates, depending on the results of its investigation, he added.

“[The] freeze order is not a case against (Binay). In fact, no hearing is necessary, no case is necessary, to freeze an account under the [Anti-Money Laundering Act],” Escudero said in an ambush interview.

“It’s not a case against them. If it were, they should’ve been given due process… The point of this whole thing is to investigate,” he said.

The senator added that the Constitution “doesn’t say anywhere that anyone is immune from investigation.”

Escudero said even President Aquino was investigated, in a way, when the Senate looked into the Mamasapano incident. “Even if the President was immune from suit, he was not immune from investigation,” he added.

The AMLC had sought to freeze the assets of Binay and his alleged dummies for alleged involvement in questionable transactions.

The Vice President is being investigated by the Office of the Ombudsman for the alleged overpriced construction of Makati City Hall Building II when he was still mayor of Makati City.

The Binay camp has decried the freeze order, contending that the AMLC had misled the court and that the petition was part of a well-orchestrated move of political foes to demolish the Vice President’s chances in the 2016 elections.

Binay had declared his intention to gun for the presidency next year.